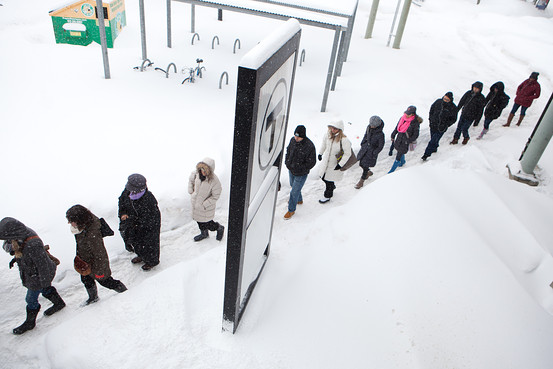 Employers added 295,000 jobs in February and the unemployment rate dropped to 5.5%, suggesting continued strength in the labor market. The economy has now added at least 200,000 jobs for 12 straight months, the longest streak since 1995. Economists reacted to the details of the Labor Department’s report, released Friday, and what it means for the Federal Reserve as it debates when to start raising interest rates.

“While some measures of the economy appear to have softened in recent months, it’s still full steam ahead for the jobs market. Although there’s still too much slack, much of which isn’t fully reflected in the headline unemployment rate, jobs are being created at a pace not seen since the late 1990s.” –Jim Baird, Plante Moran Financial Advisors

“Payrolls came in much stronger than expected especially given the issues seen over the past several weeks with the West Coast port delays and severe winter weather in the Northeast and Midwest. The strength in the February jobs report bodes well for the next few months in terms of expectations for retail sales and even more job growth in the industry.” –Jack Kleinhenz, National Retail Federation

“In one line: Strong everywhere except wages, but that’s just a matter of time….With [small business] employers now reporting unfilled job openings at the highest level since April 2006, it is not reasonable to assume such sluggish wage growth will persist much longer, especially as the wage component of the employment-cost index is accelerating.” –Ian Shepherdson, Pantheon Macroeconomics

“Wage pressures remain meager, falling back in line with trend growth established since the end of the great recession. And, while the unemployment rate continues to decline, the downward pressure reflects discouraged Americans dropping out of the labor force as much as it reflects the unemployed finding gainful employment. Thus, when looking beyond the headline rise, the Fed has plenty of reasons to be concerned regarding this morning’s report.” –Lindsey Piegza, Sterne Agee

“A stronger than expected report in terms of payroll employment gains, but average hourly earnings disappointed. The average workweek was unchanged as expected, and the unemployment rate ticked down by more than expected, although for the ‘wrong’ reasons. Although it appears as if first-quarter GDP growth is shaping up to be soft (2% or even a bit less based on available inputs), labor market momentum and a desire by many on the [Federal Reserve’s Federal Open Market Committee] to finally move off the zero fed funds target leads us to continue to believe that ‘liftoff’ will commence at the June FOMC meeting, that ‘patient’ will be dropped from policy statement on March 18, and that the tightening move, when it begins, will be a very gradual one.” –Joshua Shapiro, MFR, Inc.

“Those who want to downplay the report will point to the mere 0.1% increase in average hourly earnings, or a slowing to 2.0% on a year-over-year basis, but we would point out that real wage income growth (hours x wage rate) was 5.3% in February following a 5.6% gain in January, which puts real wage income growth on track to increase around 5% in the first quarter (given the drop in energy prices).  The unemployment rate is now in the range the Fed views as consistent with full employment and we think that the majority of the FOMC will go along with a June rate hike.” –John Ryding and Conrad DeQuadros, RDQ Economics