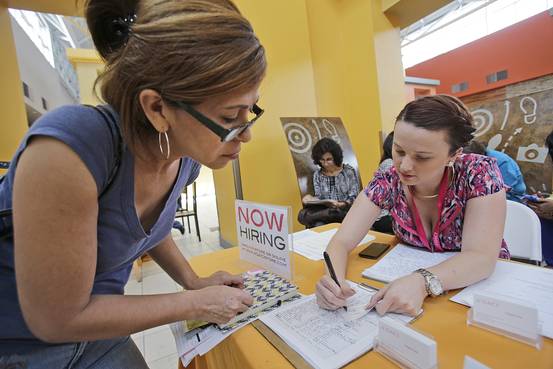 The October employment report was broadly positive, with strong gains for payrolls and wages alongside falling unemployment. The latest numbers–the strongest of the year–make a Federal Reserve interest rate increase in December more likely. Here are comments from economists on Friday’s report and the likely reaction from members of the central bank’s Federal Open Market Committee.

“We are moving the Fed call to a December rate hike. The October payroll report was very solid and exhibited broad-based strength. It suggests that labor markets have fully rebounded after slowing in August and September.” —Rob Martin, Barclays

“The obvious is that the October payroll data makes a December move almost a certainty. With the FOMC bent on delivering their first move before year end, they are less concerned with the details than the optics and the optics of this report are quite strong. To say the details are strong enough to wipe out concerns the economy has shifted to a lower pace of expansion is, however, a bit of an overstatement.” —Steve Blitz, ITG Investment Research

“October’s monthly employment report was a coup de grace for the (admittedly small) contingent that believed August and September job growth slowdowns were the start of a new and lower trend. It was also one of two data reports–the other vein November’s employment report–that could have put an easy stop to a December rate hike, though that is of course now not the case.” —Guy LeBas, Janney Montgomery Scott

“With expectations for a December rate hike seemingly at 50/50 heading into today’s report, the bounce back in job creation certainly tips expectations incrementally toward a Fed rate hike sooner rather than later. Whether or not policy makers conclude to do so in December, however, remains to be seen. Will they still view the slowing global economy and inflation that remains below its target as sufficient reason to stand pat or will the desire to get out in front of inflation before it accelerates be enough to convince them to move?” —Jim Baird, Plante Moran Financial Advisors

“The Fed’s hawks will now argue that they have hard evidence in the most widely watched (but least reliable, not that it matters right now) data that the tightness of the labor market is pushing wage gains higher. Barring a disaster in November, rates are going to rise in December. —Ian Shepherdson, Pantheon Macroeconomics

“In short, a strong rebound in payrolls, making the data look much more consistent with indicators such as jobless claims and the ISM employment components. Gains have averaged 187,000 over the last three months, down from 214,000 in the first seven months of the year but still more than strong enough to keep unemployment trending down. In other words, ongoing ‘labor market improvement,’ which is the key precondition for the start of Fed tightening. Moreover, hourly earnings are now showing acceleration….The case for tightening in December—and a lot more in 2016—looks increasingly strong.” —Jim O’Sullivan, High Frequency Economics

“Although I cannot excuse away the 271,000 increase in payroll employment, my view on the Fed has been based on global deflation risks being imported. This remains a key concern. The risks of waiting for the first rate hike are much smaller than the risks of moving too soon. The jobs report will mean the moving average in payrolls will move back up to the level that has given us 2% to 2.5% GDP growth. The wage and salary increase will support modest wage growth consistent with a 2% consumer gain. The small increase in manufacturing hours suggests the string of declines in industrial production may have ended but there is no reason to assume a strong advance will follow.” —Steven Ricchiuto, Mizuho Securities

“As disappointing as last month’s jobs report was, this one more than makes up for it. Job gains surged past analysts’ expectations, while the unemployment rate dropped even as 300,000 workers joined the labor force. Meanwhile, year-over-year wage growth hit its highest mark since mid-2009. Barring catastrophe, everything looks set for the Fed to raise rates in December.”—Curt Long, National Association of Federal Credit Unions

“After two disappointing months, payroll employment growth snapped back strongly in October, underscoring the oft-used (but just as oft-ignored) caution that economic data can be volatile and that trends are much more important than individual results. Be that as it may, the latest individual result from the jobs report certainly flashed a green light for the FOMC, thus convincingly contributing to the overall body of evidence (data, the shift in the FOMC’s forward guidance, and most Fed-speak) pointing to Dec. 16 as the date we will finally see the Fed funds target raised by 25 basis points.” —Joshua Shapiro, MFR

“The overall strength in this report should serve to enhance the chances that the Federal Reserve will begin to raise short-term interest rates at its December meeting, which was already becoming the conventional wisdom. With that said, the manufacturing sector remains challenged, as businesses continue to grapple with a strong dollar, softness in key economic markets around the world and lower commodity prices. Such headwinds have hurt demand and production, as seen in other indicators, and this report tends to echo that.” —Chad Moutray, National Association of Manufacturers

“After two disappointing months, the U.S. labor market has shot back to life. Along with the recent pickup in ISM New Orders, today’s report suggests that U.S. data momentum is rebounding into the end of the year, increasing the likelihood that the data-dependant FOMC will be comfortable hiking at the December meeting.” —Jeremy Schwartz, Credit Suisse

“Strong report, reversing the weakness seen in the prior two months. With [Chairwoman Janet] Yellen having suggested a low bar for moving in her testimony Wednesday, this should leave little doubt the Fed is going to hike rates in December barring some sort of unexpected shock in the next month.” —Ted Wieseman, Morgan Stanley

“The October report dispelled the notion that the labor market was slowing. It also likely dispelled the notion the Fed will wait until 2016 to begin tightening monetary policy. Following two weeks of surprisingly weak months, payroll employment gains surged in October. The gains were broad-based. Not only was service growth strong, but the drag from manufacturing and mining lessened during the month.” —Sophia Koropeckyj, Moody’s Analytics

“This is what Chairwomen Yellen wanted. A December liftoff is a fait-accompli. In addition to the hefty job gains, the long-waited wage gain has surfaced. After stalling a bit during August and September, the U.S. economy revved up creating both high- and low-paying jobs. However, with the economy approaching full-employment and the output gap narrowing, the rate of employment gains has slowed over the past few months. The six-month moving average of job gains has dipped to 214,833 in October from 282,000 in February and the trend could continue in the foreseeable future.” —Sung Won Sohn, California State University Channel Islands

“Regardless of the exact timing of the first rate hike, we still believe that the big story next year will be an unexpectedly strong pick-up in wage growth and price inflation, which will force the Fed into a much more aggressive policy tightening cycle than the Fed’s projections currently suggest. We expect the fed-funds rate to be close to 2% by end-2016.” —Paul Ashworth, Capital Economics