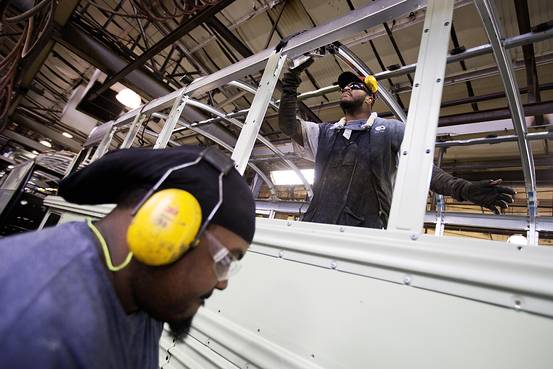 Blue Bird Corp. employees work on a school bus on the assembly line in Fort Valley, Ga., in September. “Demand from U.S. consumers, businesses and governments remains solid, as does demand for U.S.-produced goods and services, both domestically and from abroad,” said Stuart Hoffman of PNC.
DAVID GOLDMAN/ASSOCIATED PRESS

U.S. gross domestic product, the broadest sum of goods and services produced across the economy, advanced at a 1.5% seasonally and inflation-adjusted annual rate in the third quarter, the Commerce Department said Thursday. That matched the forecast of economists surveyed by The Wall Street Journal, but marks a sharp deceleration from the second quarter, when the economy expanded at a 3.9% rate. Here’s what economists had to say:

“Although the headline number of 1.5% growth was a bit weaker than expected, the details were quite good. Demand from U.S. consumers, businesses and governments remains solid, as does demand for U.S.-produced goods and services, both domestically and from abroad. The big drag was from inventories, but that will quickly fade, and growth should pick back up in the fourth quarter.” –Stuart Hoffman, PNC

“The fact that GDP data were weak because of inventories, when final demand was solid, will have encouraged the Fed to think the recent run of weak data is mainly due to an inventory cycle and helps to explain the surprising hawkishness of yesterday’s [Federal Open Market Committee] statement. Today’s report implies that consumption in the quarter ended on a softer note and supports our view that we will see a soft patch that will keep the Fed on hold for the rest of this year.” –BNP Paribas

“Third-quarter real GDP growth decelerated to 1.5%, which was broadly in line with the market expectation. The underlying components revealed a sizable drag from inventory investment that partially offset strength in domestic demand. While a below-trend quarter for growth implies the accumulation of some economic slack, the Federal Reserve will be comforted by the momentum in the domestic economy.” –David Tulk, TD Securities

“The basic contours of final demand were in line with my projections, as consumer spending was robust, housing was firm, and business outlays were mixed. While the headline figures were tamped down by the inventory adjustment, real final demand in [the third quarter] exceeded the first half average and signals ongoing strength in the economy.” –Stephen Stanley, Amherst Pierpoint

“Consumption remains strong, but business investment was sluggish. Personal consumption growth of 3.2% was modestly below our expectations of 3.5%; however, the detailed data confirm that the U.S. consumer remains strong….We expect private-sector output to continue to drive GDP growth; however a continued modest expansion in government spending would help boost headline growth at the margin.” –Jesse Hurwitz, Barclays

“There continues to be no evidence of inflationary pressures in any sector. The core [personal-consumption expenditures] grew at just a 1.2% rate in the quarter. The basic story continues to be one of modest growth with very little inflation.” –Dean Baker, Center for Economic and Policy Research

“In short, growth slowed significantly from the 3.9% pace in [the second quarter], although the quarter included a sizable inventory drag–which has probably almost run its course–and the second-quarter figure was exaggerated by catch-up for the weak 0.6% pace in [the first quarter]. Through the volatility, the trend has been and probably still is in the 2% to 2.5% range. That is weak by past recovery standards, but it has been strong enough to produce a sustained downtrend in the unemployment rate….There is nothing new in these data to make Fed officials regret the slightly hawkish tone of the FOMC statement yesterday.” –Jim O’Sullivan, High Frequency Economics

“Net, net, real GDP keeps moving along with final demand almost 3% in the third quarter. Don’t be fooled by the 1.5% headline print that was dragged down by slower inventory accumulation. There is nothing wrong with today’s report that keeps the Fed from lifting off later this year in December. Consumers, exporters, state and local governments all rowing in the same direction, ensuring that the future will be bright. Once again this morning’s news shows the economy is stronger than you think.” –Chris Rupkey, Bank of Tokyo-Mitsubishi

“A largely ‘as expected’ report, which is often not the case for the initial GDP release of a quarter. Slower inventory accumulation limited GDP growth to half that of final sales growth. Price measures were also largely as expected. This report is unlikely to result in any big changes to economists’ GDP forecasts for [the fourth quarter] and beyond.” –Joshua Shapiro, MFR

“We do not believe these third-quarter GDP data have significant implications for the timing of the Federal Reserve policy liftoff. Upcoming readings on jobs will be the more important factor. As long as we see ‘some further improvement’ in the labor market, without undue weakness elsewhere, we expect the FOMC to hike its fed funds rate target by 25 basis points at its December meeting.” –Dana Saporta, Credit Suisse

U.S. Third-Quarter GDP – At A Glance

What U.S. Growth Looks Like Without the Government Spending Slowdown