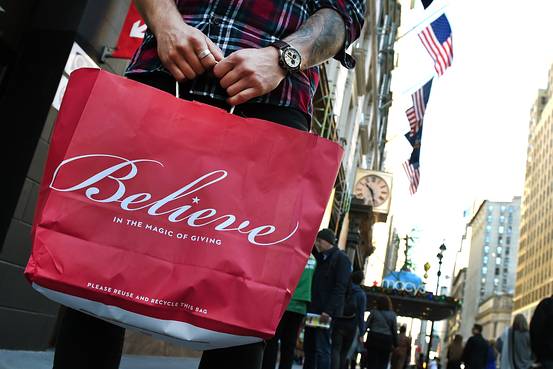 “Today’s data was positive for consumers and the outlook for domestic demand,” said Bricklin Dwyer and Laura Rosner of BNP Paribas.
TIMOTHY A. CLARY/AFP/GETTY IMAGES

U.S. gross domestic product, the broadest sum of goods and services produced across the economy, grew by a seasonally adjusted annual rate of 2.1% in the third quarter, the Commerce Department said Tuesday. That was an upward revision from the prior estimate of a 1.5% advance. Here’s what economists had to say:

“The U.S. economy continues to expand at a sustainable pace, with consumer spending and housing the primary drivers of growth. Trade and energy will remain the primary near-term drags; the former due to weak global growth and the strong dollar, and the latter due to low prices that are weighing on production and investment. But the big drop in energy prices since the second half of 2014 remains a big positive for the U.S. economy, particularly consumers and nonenergy businesses.” —Gus Faucher, PNC

“Broadly speaking, we expect the outlook for corporate profits to remain challenging given the strong dollar, rising labor costs, more restrictive financial conditions, and weak external demand….Today’s data was positive for consumers and the outlook for domestic demand and negative for corporates. We see today’s report as unlikely to shift the landscape for the Fed, which looks well on track to deliver its first rate hike in nearly 10 years on Dec. 16. ” —Bricklin Dwyer and Laura Rosner, BNP Paribas

“While the headline third-quarter GDP number was decent, and consumption activity remains at a very solid 3% pace, the mix of the revisions were not particularly great. All of the improvements were due to inventories, while the contributions from consumption, trade and government spending were slightly weaker.” —Millan Mulraine, TD Securities

“In short, the details of the revision to GDP made the composition a bit less favorable, but even a 2.7% pace for real final sales is solid. We continue to forecast a 2.7% pace for overall real GDP in [the fourth quarter]. Meanwhile, the GDI data look stronger than the GDP data. And while profits look weak, the large upward revision to wage income is positive for consumer spending.” —Jim O’Sullivan, High Frequency Economics

“Altogether, the revisions to third-quarter GDP came in as expected and do little to change the picture of solid domestic demand offset by weakness in trade and manufacturing. The upward revision to private inventory accumulation, in our view, raises the risk that manufacturing production has yet to fully adjust to the lower pace of sales. As such, the second estimate of third-quarter GDP suggests that we may see a further slowdown in private inventory accumulation in [the fourt quarter] and we will look to the incoming data to assess this trend.” —Michael Gapen, Barclays

Businesses Are Stocking More Than They’re Selling. What Does It Mean?