Economists React to Tumbling Markets: ‘We Continue to See Economic Activity in the U.S. as Solid’ – Real Time Economics 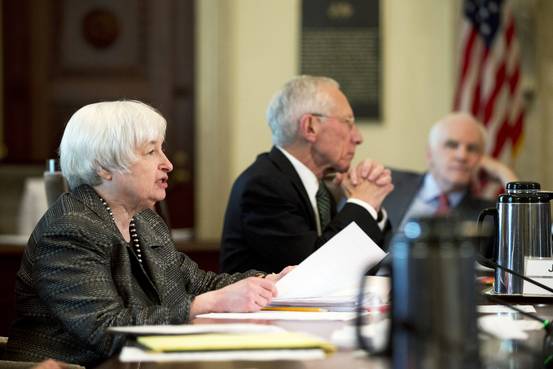 Global markets have been battered in recent days by worries over China’s economy. The turbulence has led some economists to reconsider their expectations on the timing of the Federal Reserve’s first interest rate increase since 2006. The Federal Open Market Committee is set to meet Sept. 16-17. Here’s what economists had to say Monday.

“Although we continue to see economic activity in the U.S. as solid and justifying modest rate hikes, we believe the Federal Reserve is unlikely to begin a hiking cycle in this environment for fear that such a move may further destabilize markets. Instead, we believe the FOMC will delay the start of the rate hike cycle beyond September as a means to offset tighter financial conditions while it evaluates the effect of recent volatility.” — Michael Gapen and Rob Martin, Barclays

“Based purely on U.S. economic data, conditions have already been met for the Fed to start liftoff. Therefore, the answer to the question of whether or not the Fed goes in September is in the hands of the equity market. If over the coming weeks U.S. markets brush off global concerns and refocus instead on the macroeconomic realities here at home, this could embolden the Fed to go. Promoting the narrative that the U.S. is on good enough footing to push through the global financial market headwinds unscathed would be very attractive indeed.” — Tom Porcelli, RBC Capital Markets

“There are no signs of any major downturn in the U.S. economy, economic growth in China still appears to be slowing rather than collapsing and emerging markets are not about to endure a repeat of the 1997-98 Asian crisis. The current bout of market turmoil, if it continues, might persuade the Fed to hold off on raising interest rates in September. Since that volatility doesn’t reflect any genuine economic slump, however, we wouldn’t be surprised if it proved short-lived leaving the way open for the Fed to begin raising rates at some point this year. Even a September rate hike is still a significant possibility if the turmoil abates over the remainder of this week.” — Paul Ashworth, Capital Economics

“The Fed will see one more round of inflation, retail sales and jobs reports before the September meeting, and when taken in context with falling stocks, slumping commodity prices and the precipice of a global currency war, it would likely take broad-based strength in those numbers along with market stabilization to pave the way for a near-term tightening.” — Michael Groom and Ben Ayers, Nationwide Mutual Insurance Co.

“From the perspective of an investor in U.S., European, and, to a lesser extent, Japanese equities, it’s hard to see the problem. Developed nations are, for the most part commodity importers and are thus beneficiaries of lower global commodity prices. The ramifications of the Chinese weakness are unknown and thus, to investors, scary. From a psychological perspective, it is much easier to jump out and then wait and see on when to jump back in again. In the short run, selloffs are limited by psychology and the week ahead should give us a sense of the extent of the current panic.” — David Kelly, JPMorgan Funds

“Concerns about plunging commodity costs and the potential spillover of global growth instability to the U.S. could certainly put the Fed on a more cautious footing heading into the September FOMC meeting just a few short weeks away. It will nevertheless remain to be seen whether the recent shakeup will prove the beginning of a more sinister correction or will simply represent a temporary correction of global imbalances. This will be one factor the Fed will be keen to determine in the weeks ahead, particularly when gauging the potential pass-through of declining commodity costs into U.S. inflation.” — Gennadiy Goldberg, TD Securities

“Does the recent stock market decline make it more likely the Fed holds off? Probably not. The Fed really shouldn’t be reacting to bad financial market days in setting interest rates. But, the Fed should hold off regardless. A September rate hike was a bad idea a week ago, and remains a bad idea today.” — Josh Bivens, Economic Policy Institute

“In the July FOMC meetings minutes, Committee members voiced concerns over ‘international developments’ and risks of contagion from further weakness in China. Such questions regarding Chinese growth now clearly at the forefront of the ongoing ‘carnage’ in the equity markets.” — Lindsey Piegza, Stifel

What Market Swings Like Today’s Dow Drop Mean for Inequality