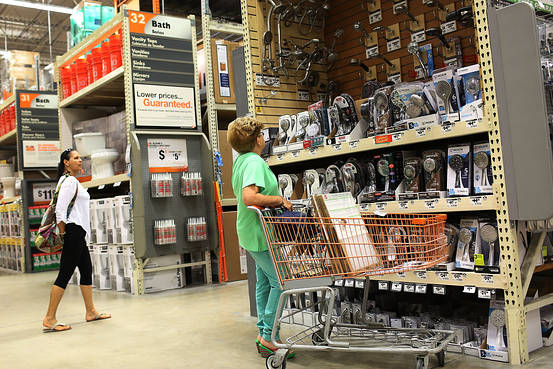 U.S. gross domestic product, the broadest sum of goods and services produced across the economy, grew by a seasonally adjusted annual rate of 3.7% the second quarter, the Commerce Department said Thursday. That was a sharp upward revision from the prior estimate of a 2.3% advance. Here’s what economists had to say:

“The U.S. economic recovery shifted up a few gears in second quarter with the second print of the GDP estimate….This suggests a sharp acceleration in economic growth momentum following the weather-induced sluggish performance in first quarter. The overall tone of this report was exceptionally strong.” —Millan Mulraine, T.D. Securities

“The average increase over the first six months of the year was just 1.8% to 1.9%….These data points show the economy despite all its volatility is still locked on the same shallow growth path that has been in place for the past several years.” —Steven Ricchiuto, Mizuho Securities

“Because most of the adjustment was due to new July data, this revision suggests that the economy gained momentum at the end of the quarter.” —Maninder Sibia and Steven Wood, Contingent Macro Advisors

“The first-quarter slowdown is now very clearly seen to be a weather hit (we still wonder about lingering seasonal problems, too) and the net impact of the crash in oil prices has been minimal. Oil-related activity has been crushed but has been offset by gains elsewhere.” —Ian Shepherdson, Pantheon Macroeconomics

“It is hard not to be disappointed with growth in the first half of 2015, which expanded by 2.2% at the annual rate. While this was higher than the 1.5% annual rate observed in the previous estimate, it is more consistent with the low growth rates experienced since the end of the Great Recession than with the optimism for traction in the economy that so many manufacturers had when we started the new year.” —Chad Moutray, National Association of Manufacturers

“Let’s stop talking about the lackluster U.S. economic expansion. Real GDP in the second quarter was 2.3% when we woke up this morning, and now it is even faster, in the first revision to the data released today growth is revised up to a fast-break 3.7% increase. We can already hear the push back from the economy’s critics, ‘Yes, but is this sustainable?’ Wall Street thinks growth is real if that’s any help.” —Chris Rupkey, Bank of Tokyo Mitsubishi UFJ

“This boost is a positive sign for growth, but the Fed should tread with caution on a rate hike as the signals continue to be mixed. Although GDP growth came in higher than expected, gross domestic income—an alternative measure of economic growth—came in at a much weaker 0.6%.” —Tara Sinclair, Indeed

“Given how weak first-quarter GDP was initially reported to be, the growth outlook was an impediment to Fed liftoff through the July meeting (which fell the day before the initial second-quarter GDP report).  I think we can safely say now that the GDP box is checked.“—Stephen Stanley, Amherst Pierpont Securities

“We view the second-quarter revisions as encouraging on balance, but also note that these statistics are stale in the minds of FOMC policy makers relative to the recent volatility in financial markets.” —Jesse Hurwitz, Barclays

By Another Measure, U.S. Economic Growth Has Nearly Stalled This Year

5 Things the U.S. GDP Report May Tell Us About What’s Next