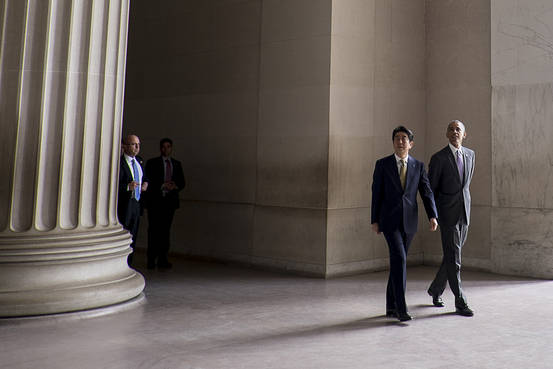 President Barack Obama and Prime Minister Shinzo Abe of Japan visit the Lincoln Memorial on Monday in Washington. Mr. Abe was in the nation’s capital to discuss a range of economic, security, and global issues, including progress on the Trans-Pacific Partnership.
PETE MAROVICH/GETTY IMAGES

The White House is attacking one of the central critiques of its trade policy: that free-trade agreements can lead to outsourcing and offshoring that destroy American jobs. Economists, though, aren’t buying the administration’s logic.

President Barack Obama and administration officials say workers shouldn’t worry about massive job shifts stemming from the 12-nation Trans-Pacific Partnership, now in the final phase of negotiation,  because the pangs of globalization have run their course. In a study released Friday, White House economic advisers found no significant link between U.S. free-trade agreements and investment abroad.

The evidence from the investment figures “suggests that U.S. firms do not increase net outsourcing when the United States enters FTAs,” says the report, from the White House Council of Economic Advisers. It offered 10 reasons to support the administration’s trade policy. The report comes as Congress is considering “fast track” legislation that would expedite passage of the Pacific deal.

“There has not been an increase in outsourcing,” the chairman of the advisers, Jason Furman, said in a call with reporters. “On net, the different forces involved here roughly cancel out.”

But economists on both sides of the trade debate say the White House seems to be barking up the wrong tree, muddling arguments about two distinct things–foreign investment and outsourcing–on a hot-button issue that is dividing the public and Congress.

Labor unions and skeptical economists are warning the Pacific pact could lead to the kind of outsourcing many workers blame on the North American Free Trade Agreement, the landmark 1993 deal with Mexico and Canada.

Several economists quickly shot back at the White House argument, saying foreign direct investment measured in the White House study and the outsourcing the administration is pledging to avoid aren’t the same thing, despite some overlap.

The key finding about investment “doesn’t really speak to the issue that the opponents are making,” said Gary Hufbauer, a trade expert who backs the TPP at the Peterson Institute for International Economics, which supports trade liberalization. “I applaud what Furman is trying to do, but this doesn’t do it.”

Classic outsourcing and offshoring involve a company halting operations in one country and obtaining the same product or services abroad. But that doesn’t necessarily involve foreign investment, since many companies can get the product under contract without building a plant or making an acquisition, Mr. Baker said.

One the other hand, the White House figures for foreign direct investment are likely dominated by large acquisitions by U.S. companies in Canada and Europe that don’t necessarily shift production or services, he said. Other foreign investments, such as U.S. retailer building stores in Asia, also aren’t considered outsourcing, Mr. Hufbauer said.

The White House economists’ argument is valid if it’s about investment and not outsourcing, according to the outside economists. But not for the reason they emphasize—that U.S. trade agreements contain labor and environmental safeguards as a disincentive investment abroad.

The TPP is unlikely to lead to a wave of U.S. investment abroad because it won’t significantly change the biggest factors for making investments—or withholding investments—in places like Vietnam and Malaysia, Messrs. Baker and Hufbauer said.

“Realistically, it’s hard for me to imagine a huge flood of outsourcing ot Vietnam, because we already have a lot of industry there,” Mr. Baker said.

Trans-Pacific Partnership – At a Glance