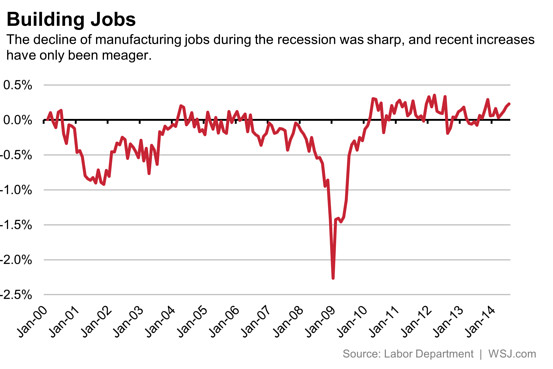 American factories are finally producing more of something that’s been in short supply: Jobs.

Manufacturers last month added 28,000 workers, boosting the total added this year to 107,000, according to Friday’s jobs report from the Labor Department. That’s a nice step up from last year, when the sector added only 88,000 jobs for the full twelve months. Last year included a rough patch from April to July, when manufacturers actually shed 25,000 jobs.

While the latest numbers are an improvement, they underscore how much more hiring needs to occur for the U.S. to achieve one of President Barack Obama’s more ambitious economic goals: To add 1 million manufacturing jobs during his second term. The Alliance for American Manufacturing, which tracks progress on this, notes the U.S. remains 805,000 jobs short of that goal.

“Manufacturing punched above its weight in July, showing that a rebound in the sector is possible,” said the group’s president, Scott Paul. “But we still have a long way to go.”

The alliance—an advocacy group for U.S.-based production funded by both business and labor—notes the U.S. will need to add an average of 27,758 each month for the rest of President Obama’s term to meet the goal.