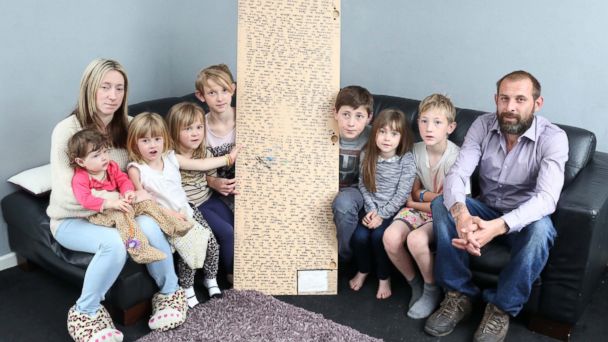 Days after Athena Orchard, 13, died of bone cancer, her family discovered a message on the back of her mirror. (Credit: Caters News Agency)

Days after 13-year-old Athena Orchard died from cancer, her family discovered a hidden message on the back of her mirror.

“Happiness depends on ourselves,” she wrote. “Maybe it’s not about the happy ending. Maybe it’s about the story.”

Athena was diagnosed with osteosarcoma, a form of bone cancer, after discovering a tiny lump on her head in December, according to Caters News Agency.

She collapsed at home around Christmas, and doctors found the cancer in her spine, left shoulder and head. After undergoing a seven-and-a-half hour surgery to remove the spinal tumor, she started chemotherapy.

Though Athena had once been athletic and enjoyed boxing, soon she was too weak to leave her bed, her mother Caroline Orchard, 37, told Caters.

Athena died May 28 in the United Kingdom.

As her parents went through her belongings in the days that followed, they discovered the mirror’s message.

“She never mentioned it, but it’s the kind of thing she’d do,” Athena’s father, Dean Orchard, 33, told Caters. “I started reading it, but before long I had to stop because it was too much. It was heartbreaking.”

Athena wrote about love, happiness and illness. The Orchards say they’ll never get rid of the mirror.

“Life is only bad if you make it bad.”