Federal Reserve policy makers have been consistently too optimistic about economic growth and too pessimistic about the falling unemployment rate. But ask them if they’re uncertain about their forecasts and this is their answer: no more than usual. 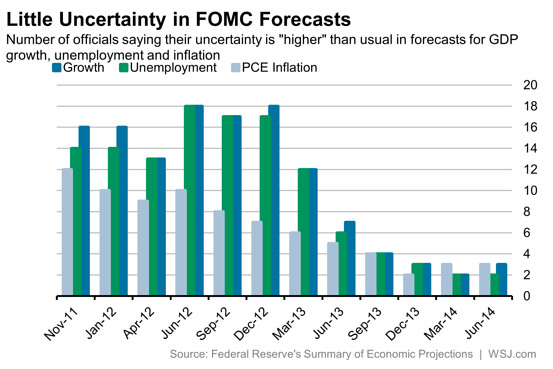 In 2012, Fed officials said they were more uncertain than usual about their forecasts for growth, unemployment and inflation. But over the course of 2013 their uncertainty has declined, and now almost all Fed officials are confident in their forecasts, according to the Fed’s self-assessment of uncertainty which was released Wednesday as part of Fed’s June meeting minutes.

Fed officials have recently been concerned that markets have grown too complacent. Yet even at the Fed, only three officials rank their uncertainty about growth as high, and only two are more certain than usual about their unemployment forecasts. (The minutes do not identify by name which Fed official makes which forecast.)

For the record, most Fed officials see growth of 2.1% to 2.3% this year and unemployment at the end of 2014 between 6% and 6.1%. Those forecasts were made in advance of their June 17-18 policy meeting, and already they’re beginning to look a little suspect.

The economy contracted at an annualized rate of 2.9% in the first quarter of 2014, according to a Commerce Department report released the week after the Fed meeting. That’s going to make 2.3% growth over all of 2014 a difficult target to reach. (As we noted earlier, downward growth revisions at the Fed have been inexorable.) And the unemployment rate dropped to 6.1% in June from 6.3% in May according to the Labor Department‘s July 3 report. Another month or two with an unemployment rate decline and the Fed will have blown its unemployment forecast as well.