Federal Reserve officials sharply downgraded their expectations for growth this year, with a strong majority of officials continuing to predict that the central bank will begin raising short-term interest rates next year. 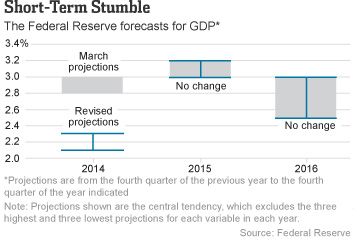 According to forecasts released by the Fed on Wednesday, 12 officials believe the Fed will end its current near-zero short-term rate policy some time in 2015. That’s a subtle shift from the Fed’s March forecasts, when 13 officials saw liftoff coming next year. One Fed official continues to believe rate increases will come this year, while three now expect the rate rise to arrive in 2016, versus two who held that view in March.

Over the longer run, a majority of officials still see the Fed’s short-term interest-rate target coming in around 4% longer run, a view largely unchanged from the March projection. That path toward getting there is seen as a slow and steady one. Most Fed officials see short-term rates at 2% or lower by the end of 2015.

The release of the Fed’s updated economic and monetary policy forecasts comes in conjunction with outcome of the Federal Open Market Committee meeting held over Tuesday and Wednesday. The forecasts offered by the Fed are updated quarterly, with June’s numbers updating the views offered in March.

The biggest shift in the Fed’s outlook was widely expected. Fed officials also said in their projections they currently expect growth over the course of this year to come in between 2.1% and 2.3%, versus the 2.8% to 3% projection made at the March meeting. The forecast for subsequent years were little changed: 2015 growth is seen between 3% and 3.2%, and 2016 activity is seen rising 2.5% to 3%.

The growth outlook has been particularly challenging for the Fed after the start of the year was struck with broad-based weakness. Fed officials and private-sector economists alike agree the swoon was related to harsh winter weather over much of the U.S. Most believe the weakness is likely to be temporary.

The Fed makes public its economic and monetary policy outlook because officials believe greater openness makes their policy actions more effective. But the central bank’s numbers are viewed cautiously by many market participants.

For some time, the Fed has overestimated the growth and inflation outlook. Meanwhile, it has been surprised at how quickly the unemployment rate declined. The Fed’s monetary policy projections have also proved somewhat problematic, frequently overemphasizing the outlooks held by officials who are outside the consensus driving policy.

The so-called “dot” plots that chart the outlook lay out the view of all central bankers. So while a core of officials like Chairwoman Janet Yellen and New York Fed President William Dudley are firmly in control of the monetary policy process, changes in the views of regional bank presidents who are often at odds with the central bank’s easy-money policy stance can make it appear like the Fed’s views on rates are changing when they aren’t in fact.

At her news conference after the March policy meeting, Ms. Yellen warned “one should not look to the dot plot, so to speak, as the primary way in which the Committee wants to or is speaking about policy to the public at large.” She said market participants should instead focus on the monetary policy message conveyed in the Federal Open Market Committee statement.

Consistency is also a problem for the Fed given the shifting membership among policy makers. Among the regional bank presidents, leadership of the Cleveland Fed has shifted from the reliable centrist Sandra Pianalto to Loretta Mester, who has yet to lay out her views on monetary policy. Among governors, Jeremy Stein has left and Stanley Fischer has come on board as vice chairman. Lael Brainard is also joining as a governor, but won’t yet contribute to the forecasting process due to the fact she was only confirmed on Monday.

How’d the forecasters do? See how Fed officials’ new federal funds rate projections compare with those of private economists surveyed by the Journal and futures markets. 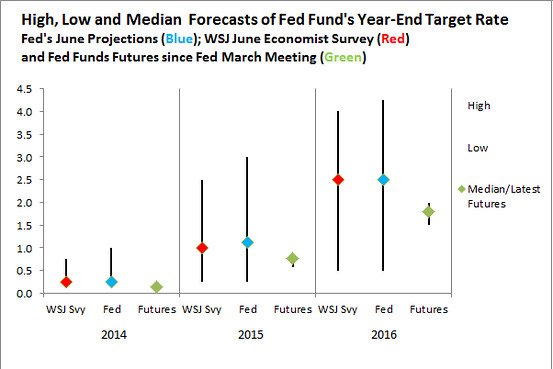