The Federal Reserve should hold short-term interest rates near zero long enough to drive unemployment well below 5%, even if it means letting inflation exceed the central bank’s 2% target.

That’s according to Laurence Ball, economics professor and monetary policy expert at Johns Hopkins University, in a paper to be published next week by the Center for Budget and Policy Priorities and made available to The Wall Street Journal.

Fed officials have made clear they expect to start raising their benchmark short-term interest rate, the federal funds rate, from near zero sometime this year as long as the economy continues to improve.

Fed officials last week released updated economic forecasts showing they generally expect unemployment to fall from 5.5% in February to between 5.0% and 5.2% by the end of this year, and they expect the jobless rate to settle into that range in the long run. They do forecast the rate could go as low as 4.9% by the end of 2016 and 4.8% by the end of 2017.

Mr. Ball says the Fed could create more jobs by letting the unemployment rate fall lower. It should seek to push the rate “well below 5%, at least temporarily,” he writes. That could help bring some discouraged workers to reenter the labor market, as well as help the long-term unemployed find work and involuntary part-time workers find full-time jobs, he said.

“A likely side effect would be a temporary rise in inflation above the Fed’s target, but that outcome is acceptable,” writes Mr. Ball, who has been a visiting scholar at various central banks, including the Fed and often testifies on Capitol Hill about Fed policy. “To push unemployment down, the Fed should keep interest rates near zero for longer than is currently expected, certainly past the end of 2015.”

U.S. inflation has been undershooting the Fed’s target for nearly three years. 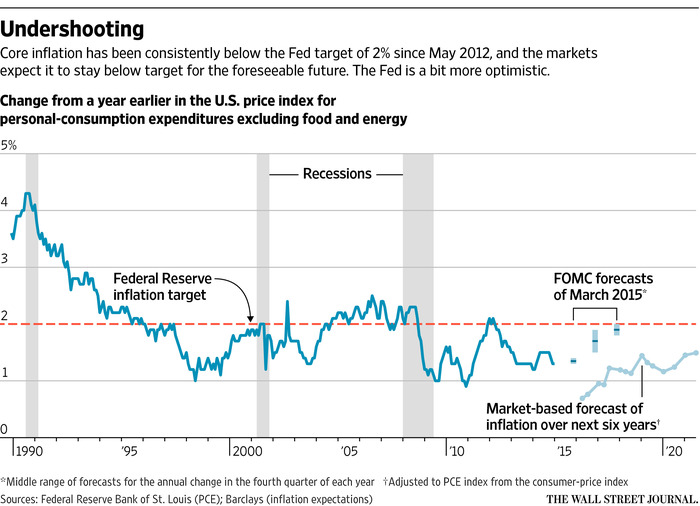 Mr. Ball’s view is not shared by many Fed officials, who worry that waiting too long could allow inflation to take off or fuel dangerous financial bubbles. Still, his arguments are similar to those made by Charles Evans, president of the Chicago Fed, who worries that moving too soon risks crimping the economic recovery.

Mr. Evans has said the Fed should wait until early 2016 before raising rates, in part because he views the risks of moving too soon as far outweighing those of moving too late.

That logic is echoed in Mr. Ball’s work, which argues that the Fed would have a much easier time raising interest rates to fight modest inflation than it would battling persistently low inflation or deflation with rates already close to zero.

“To guard against a deflationary spiral, the Fed should err on the side of too much stimulus rather than too little. It would be imprudent, therefore, to raise interest rates during 2015,” Mr. Ball concludes.