The Federal Reserve must be patient before it considers raising interest rates even after the central bank winds down its bond-buying program and as the recovery picks up steam, Atlanta Fed President Dennis Lockhart said Tuesday.

Mr. Lockhart, speaking in Baton Rouge, La., told an event sponsored by Louisiana State University that he was sticking to his 3% growth forecast for the remainder of the year despite a weak first quarter that he ascribed primarily to weather. 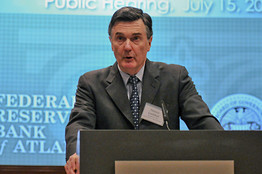 At the same time, Mr. Lockhart said there were sufficient remaining signs of weakness in both the labor market and inflation that would allow the policy-setting Federal Open Market Committee to be patient before it begins raising interest rates, which have been effectively at zero since Dec. 2008.

“When quantitative easing is done, anticipation of the next policy move will likely intensify,” Mr. Lockhart said. “A combination of a shortfall from full utilization of our nation’s labor resources and inflation below the FOMC’s longer-term objective would, in my view, justify patience in raising policy rates.”

The official said “I continue to be comfortable with a projection of the second half of next year” as the most likely time in which the Fed will move to raise interest rates.

Many investors currently expect the Fed to wind down bond buys in the fourth quarter, an estimation corroborated by Mr. Lockhart. They also see interest rate hikes starting sometime in the summer of 2015, although forecasts on that front vary more widely.

The Fed has been gradually paring back its bond-buying program aimed at keeping long-term borrowing costs down, most recently reducing the monthly purchase amount to $45 billion. In response to a deep recession and anemic recovery, the Fed has bought over $3 trillion in securities, increasing the size of its balance sheet more than fivefold to nearly $4.3 trillion.

“I feel the need to see confirming evidence in the data validating the view that above-trend growth is occurring and is sustainable, and that the FOMC is closing in on its policy objectives. One quarter’s data isn’t enough,” Mr. Lockhart said. “I expect it will take a number of months for me to arrive at conviction on that account.”

Even when interest-rate increases begin, Mr. Lockhart said, the Fed is likely to proceed with caution.

“When the first move to tighten policy is taken, I would expect it to begin a cycle of gradually rising rates,” Mr. Lockhart said. “Even as the economy accelerates this year to a somewhat higher growth trajectory, as I expect, I think continued monetary accommodation will be warranted for some time.”

Speaking with reporters after his address, Mr. Lockhart said the exact timing of the ending of the bond-buying program was something he was agnostic about. He also said he agreed with other Fed officials that rate hikes should come before any move to allow the Fed’s balance sheet to shrink. That means the Fed will likely continue to reinvest the proceeds from maturing bonds into new securities until some time after the rate hike cycle begins.

Mr. Lockhart also told reporters he continues to believe that over the long run near zero percent short-term rates will move back to around 4%, a view inspired by his confidence that over time, the economy will finally fully recover from the affects of the financial crisis.

The official also said he’s seeing signs of life again in the housing market after the recent period of weakness. Mr. Lockhart also said he could accept the Fed going a little above its 2% inflation target, although he would not accept price pressures that breached a 2.5% annual gain.