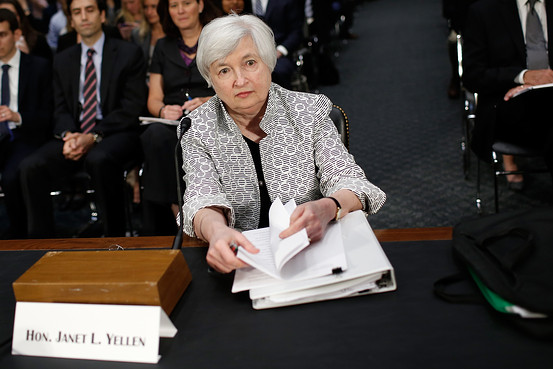 Federal Reserve Board Chairwoman Janet Yellen arrives for testimony before the Senate Banking, Housing and Urban Affairs Committee in Washington to deliver the Fed’s “Semiannual Monetary Policy Report to the Congress.”
Getty Images

The Federal Reserve is keeping a close watch on what it sees as potentially excessive risk-taking in the market for leveraged loans.

In its semi-annual report to Congress on monetary policy, the Fed downplayed the possibility that its policies of ultra-low interest rates could be fueling asset bubbles.

However, it also flagged certain corners of financial markets, such as lower rated corporate debt, as showing looser underwriting standards.

“The Federal Reserve continues to closely monitor developments in the leveraged lending market and, in conjunction with other federal agencies, is working to enhance compliance with previous guidance on issuance, pricing, and underwriting standards,” the report said.

The report also cited concerns about the technology sector. “Equity valuations of smaller firms as well as social media and biotechnology firms appear to be stretched, with ratios of prices to forward earnings remaining high relative to historical norms.”

In response to a deep recession and disappointing recovery, the Fed slashed interest rates to effectively zero in December 2008. It has also bought over $3 trillion in mortgage and Treasury bonds in an effort to jump-start growth.

The results have been mixed, with the economy struggling to grow above a rate of 2%, but unemployment falling more quickly than Fed officials expected. Having peaked at 10% during the recession, unemployment now stands at 6.1%.

Critics of central bank policy, including some officials inside the Fed, worry the unconventional measures are causing investor complacency, and could be sowing the seeds of the next crisis.

She said in testimony Tuesday that the prices of real estate, stocks and corporate bonds “remain generally in line with historical norms.”

Most analysts on Wall Street believe the central bank will hold off on starting to raise interest rates from rock-bottom lows until sometime next year.