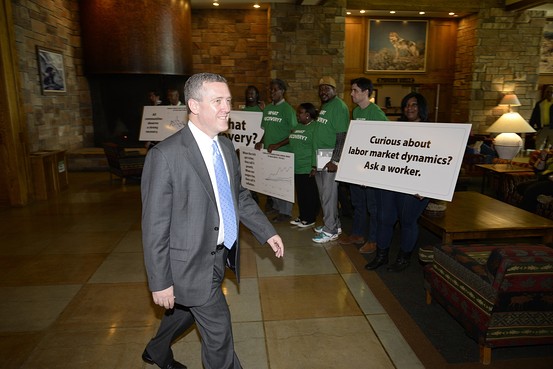 NEW YORK–Federal Reserve Bank of St. Louis President James Bullard told CNBC Friday that the debate within the central bank is now fully centered on when to end its easy-money policies.
“We are pretty close” to achieving the Fed’s job and inflation goals, Mr. Bullard said in the interview. “We’ve really had pretty strong growth, and I think the labor markets are showing that.”
That take on the economy led Mr. Bullard to once again state that when it comes to putting in place the first increase in short-term interest rates from their current near-zero levels, “I’m sticking right now with the end of the first quarter [of 2015] on lift off.” But he also added this first move for the Fed is “very dependent” on his current forecast, and if the outlook changes, so will his view on monetary policy.
Mr. Bullard was interviewed on the sidelines of the Kansas City Fed’s annual research conference in Jackson Hole, Wyo., ahead a hotly anticipated speech by Fed Chief Janet Yellen on labor-market issues. Mr. Bullard’s comments in the interview were largely consistent with what the official has been saying in public over recent weeks.
The official has been on the leading edge of those policy makers who believe solid improvements in the economy may be moving forward the timing of interest-rate increases. Most officials on the Fed reckon the first increase in short-term rates will come next year. In a television interview Thursday, San Francisco Fed leader John Williams, who is closely aligned with Ms. Yellen, said he still believes the first rate increase will not come until the summer of 2015. But meeting minutes for the Fed’s July policy gathering, released Wednesday, showed some officials mulling moving forward the timing of rate increases to reflect solid labor-market gains and signs inflation is moving higher.
“I think we’ve really got, you know, a good situation here” with the economy, and it is likely to continue, Mr. Bullard said. Because of that, it is now time to move the debate among policy makers squarely toward what it will take to remove monetary policy from its current emergency settings. For the Fed, it is now all about the “subtleties” of how to raise short-term interest rates.
Mr. Bullard warned in the interview that markets may be underestimating the Fed’s willingness to raise rates, saying many investors appear to be “more dovish” on monetary policy relative to Fed officials.
In an interview on Fox Business Network, Philadelphia Fed leader Charles Plosser again expressed his concern about the current state of monetary policy, saying the Fed should state more clearly that interest rates will be tied to the economy’s performance and not a date on the calendar.