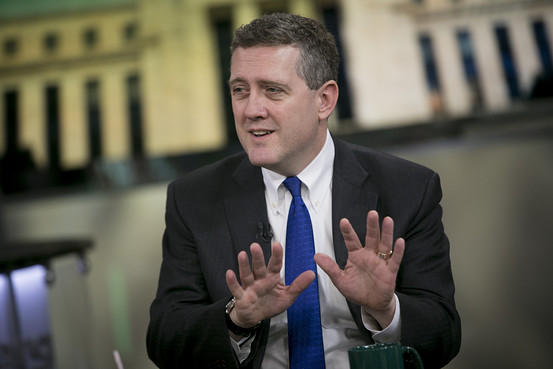 Federal Reserve Bank of St. Louis President James Bullard warned that if the U.S. central bank isn’t raising rates by the end of September, it could be a bad thing for the economy.

In an interview with The Wall Street Journal late Thursday, the official said his expected economic outlook suggests that raising the central bank’s short-term interest rate target will likely need to happen by the end of the third quarter given the expected path of hiring, which has been strong.

Given that it is quite possible what is now a 5.7% jobless rate will have fallen to less than 5% by that time, “we would be behind the curve” if rate increases haven’t happened by then, Mr. Bullard said.

For some time, Mr. Bullard has been a strong advocate of raising rates sooner than many of his colleagues want. Recently, the official had advocated in favor of increasing rates by the end of the first quarter. That won’t happen in the wake of comments by Federal Reserve Chairwoman Janet Yellen that said lifting rates off of their current near-zero level is off the table until central bankers meet in mid-June.

In the interview, Mr. Bullard acknowledged that data, most notably on the inflation front, favored pushing back the starting point of rate increases relative to his earlier prediction. But he nevertheless believes strong growth and ongoing job gains mean the Fed needs to be thinking seriously about moving rates off of their current levels.

“The burden is still on the data,” and if oil prices stabilize, tepid inflation data will likely abate and help open the door to central bank action, he said. Oil prices are the main reason for inflation weakness and it is likely the strong declines seen in recent months won’t continue, which means the strong drag they have imposed on headline inflation, which is well below the Fed’s 2% target, will almost certainly abate over time, he said.

Mr. Bullard said he is worried financial markets aren’t fully taking on board the likely path of monetary policy, and are underpricing what the Fed will do with interest rates.

“The market is pricing in a later and slower and shallower pace of increases” compared to what central bankers think, the official said. “The mismatch has to get resolved at some point, and I think there’s some risk it could be resolved in a violent way,” which he suspects no one would like to see.

Mr. Bullard also warns that if the Fed doesn’t move relatively soon toward higher rates, the risk of financial imbalances will mount.

“I’m not that worried today about bubbles, but from here going forward…is the time when we are most vulnerable” to the financial bubbles that emerge when easy money policies persist in an economy that has been growing for some time, the official warned.

He noted that even as the Fed edges closer to rate rises it still expect interest rates to stay very low for well into the future. That could be a recipe for financial markets to get into trouble, and he doubts regulatory powers will be enough to reduce the threat, he said.