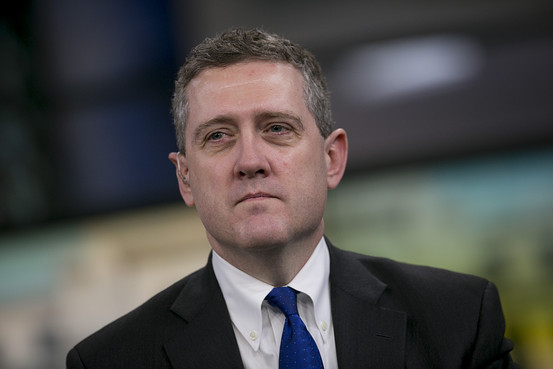 The Commerce Department downgraded the first-quarter gross domestic product to a 2.9% drop, but St. Louis Fed President James Bullard isn’t worried. It is likely to be an “aberration,” he said.

“It’s giving me heartburn, but I think the market’s right to shake this off,” Mr. Bullard said Thursday in an interview on the Fox Business Network. “Looking forward over the next four quarters, most forecasters have 3%+ growth.”

Mr. Bullard said the weak report for the first quarter was likely distorted by inventories, weather, and by the challenges of accounting for health-care spending under the new law.

“Whatever is going on doesn’t seem to match up with the other data that we have,” he said, citing that payrolls have been rising by 200,000 or more a month.

At their policy meeting last week, officials on the Federal Open Market Committee lowered their forecasts for growth in 2014, acknowledging the weakness at the beginning of the year. Most forecast growth of 2.1% to 2.3% this year, down from a forecast of 2.8% to 3% at their March meeting. If Fed officials, like Bullard, continue to assess that economic growth will pickup after the weak first quarter, they will be more comfortable continuing their strategy to cut their pace of monthly bond purchases by $10 billion a meeting, ending the program later this year.