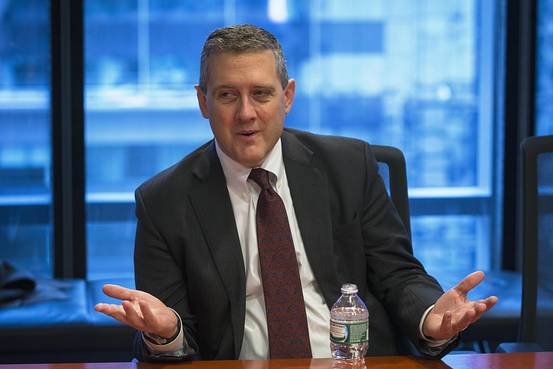 James Bullard, president of the St. Louis Federal Reserve Bank, speaks during an interview with Reuters in Boston.
Reuters

“I see September having a 50% probability right now” for a boost in the Fed’s overnight short-term interest rate target, Mr. Bullard told Fox Business Network. He was referring to a widely-expected boost in what are now near zero short-term rates, that would push the central bank’s interest rate target off a level in place since the end of 2008.

Mr. Bullard’s comments on the interest rate outlook were most likely the last markets and other observers will get ahead of next week’s rate-setting Federal Open Market Committee. Starting on Tuesday, Fed officials enter a so-called blackout period, refraining from comment on monetary policy issues. There is little chance the Fed will change rates next week, but most Fed officials favor a rate rise this year, and some have pointed to September as a good time to act.

In recent comments, Mr. Bullard had already pointed to his interest in the Fed’s September meeting as a starting point for a rate rise campaign he expects to be gradual in nature. Mr.Bullard said in the interview he envisions a “couple” of rate rises this year if the economy achieves the 3% growth level he expects for the remainder of the year.

Mr. Bullard, who isn’t a voting member of the FOMC right now, said China and Greece do pose risks for the U.S. outlook, but he expects overseas trouble won’t derail a positive outlook.

Mr. Bullard also said that while he has some concern ultra-low interest rates might be generating too much risk taking in the financial sector, he doesn’t see any evidence of significant trouble now. To ensure problems don’t grow worse, Mr. Bullard said rates do need to rise over time.

Mr. Bullard said reform legislation now being considered that would make the New York Fed president’s position subject to Senate approval is a bad idea. He noted the government’s ongoing inability to fill key positions because of political wrangling, and said that would be a bad thing to extend to the Fed.