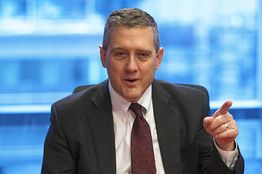 Current low levels of U.S. inflation are likely temporary and the risks of keeping U.S. policy rates at zero for too long “may be substantial,” Federal Reserve Bank of St. Louis President, James Bullard, said Thursday, signaling that the U.S. central bank should get on with raising rates soon.
“Now may be a good time to begin normalizing U.S. monetary policy so that it is set appropriately for an improving economy over the next two years,” Mr. Bullard said in prepared remarks to the OMFIF City Lecture in Frankfurt. “Even with some normalization, policy will remain exceptionally accommodative.”
Mr. Bullard’s comments echo recent warnings he has made that the Fed’s zero interest rate policy is no longer appropriate for the U.S. economy that has grown strongly in recent quarters, pushing unemployment down.
Mr. Bullard, who isn’t a voting member of the Fed’s rate-setting board this year, warned that if interest rates remain near zero for too long, destabilizing bubbles may form in some asset markets.
“If a bubble in a key asset market develops, history has shown that we have little ability to contain it,” Mr. Bullard said. “A gradual normalization would help to mitigate this risk while still providing significant monetary policy accommodation for the U.S. economy.”
In his speech, the Fed official downplayed the effects of the U.S. dollar’s strong rise in recent months, brought on in part by the European Central Bank’s decision in January to launch a large-scale bond purchase program that began earlier this month.
In contrast, Fed officials signaled this month that they are likely to raise interest rates this year by dropping their assurance that they will be “patient” in tightening policy. The change in language “should be interpreted as a sign of strength for the U.S. economy,” Mr. Bullard said Thursday.
Economic research “suggests limited effects of exchange rate movements on U.S. economic performance,” Mr. Bullard said.
Even if the U.S. gross domestic product is only assumed to have expanded at a 1.5% annualized pace in the first quarter, the economy is likely to grow in the 3% range over the medium term, Mr. Bullard said.
Meanwhile, “labor markets continue to improve and are approaching or even exceeding normal performance levels,” he said.
Low levels of U.S. inflation are likely temporary and driven by oil prices, Mr. Bullard said.

–Jason Douglas contributed to this article.