Federal Reserve Vice Chairman Stanley Fischer said Monday he broadly supports economic-stimulus efforts undertaken by major foreign central banks and is unworried for now about how that’s affecting the dollar, in remarks that reiterated the Fed is on track to raise short-term rates this year.

“Our main interest is that the European economy, and the Japanese economy and the British economy recover,” Mr. Fischer said. The U.S. “will be better off if they are growing faster,” and stimulus measures undertaken by 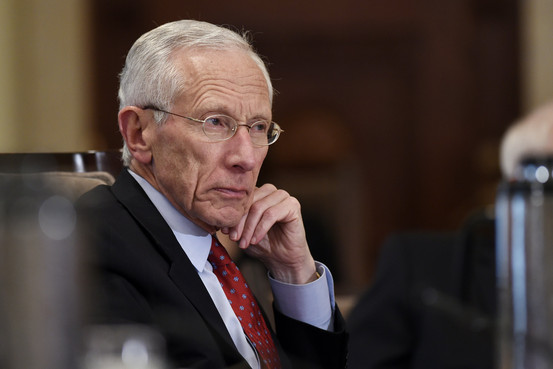 these banks to spur growth are something we “fundamentally support,” he said in remarks before the Economic Club of New York.

Mr. Fischer, the Fed’s second-in-command, shrugged off the impact of those actions—including the starting of bond buying by the European Central Bank—on the dollar, which has shown considerable strength. The value of the dollar has concerned some because it creates headwinds for U.S. exporters that can slow overall growth, while pushing down already very weak levels of inflation.

Mr. Fischer said the dollar’s strength does in part show the impact of foreign central bank stimulus. But it also reflects the “relatively strong performance of the U.S. economy.” The official declined to comment directly the future of the dollar, saying “exchange rates have a habit of overshooting. I’m not going to be making any exchange rate forecasts.”

But he said the dollar will be something watched by the Fed over time as it gets closer to the period when it will raise rates. The official also noted he saw no sign major central banks are taking action strictly to weaken their currencies.

Mr. Fischer reiterated that when it comes to U.S. policy, officials will likely raise short-term rates “before the end of the year.” The decision to act will be informed by “a wide range of information regarding labor market conditions, inflation, and financial and international developments,” he said.

The Fed will be confident it can raise rates when there has been “further improvement in the labor market and we are reasonably confident” inflation will rise back to the Fed’s 2% target, the official said.

But Mr. Fischer also cautioned that past may not be a good guide to future Fed action. “A smooth path upward in the federal funds rate will almost certainly not be realized, because, inevitably, the economy will encounter shocks” that policy makers and others do not see coming, Mr. Fischer said. He noted that once rates begin to rise, they could easily move “up and down” depending on how the economy performs.

Mr. Fischer’s remarks followed last week’s Fed meeting, which continued to prepare the way for interest rate increases from current near-zero levels at some point later in the year. Then, officials dropped their pledge to remain “patient” on rate rises, and signaled that an active debate over when to boost borrowing costs begins with the mid-June policy meeting.

Fed officials are weighing rate rises amid ongoing solid gains in the labor market. Complicating their decision is a round of mixed economic data to start the year, and inflation that continues to fall well below the Fed’s 2% price rise target. A number of Fed officials have signaled they will be willing to raise rates even with inflation on the weak side, but some central bankers believe that would be a mistake.

Mr. Fischer noted in his speech the current 5.5% jobless rate is close to the “natural” level of unemployment in the U.S. He said the Fed continues to expect progress is getting inflation back to 2%. He said low productivity in the U.S. likely has something to do with the more rapid improvement in the job market than many had thought likely, while leading to lower-than-expected activity gains.