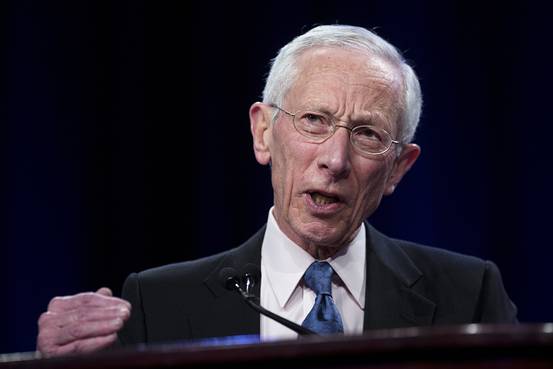 “There are signs of wages beginning to rise in a variety of places,” Mr. Fischer said during a panel discussion in Washington, when asked how the Fed will evaluate whether inflation is headed back toward its 2% annual target.

While possible slower productivity growth complicates the question of how fast wages will rise, “we’re fundamentally relying on there being an increase in the demand for labor and supply moving towards full employment” to drive prices higher, he said.

Most Fed officials expect the U.S. central bank will begin to raise short-term interest rates, which have been pinned near zero since December 2008, sometime this year. But the precise timing of the first rate increase remains uncertain.

Sluggish wage and price increases can be a signal of underlying weakness in the economy. In March, the Fed said it would begin to raise rates when the labor market had improved further and when officials were “reasonably confident” that inflation will rise toward their 2% goal.

U.S. inflation has undershot that target for nearly three years. Since mid-2014, broad price gauges have declined further, largely because of a plunge in global oil prices.

“The inflation rate was coming up reasonably well, and I think most of us thought we were going to get to 2% quite soon, possibly by next year,” Mr. Fischer said. But, he said, inflation was pushed down by falling gasoline prices, and also restrained by a stronger U.S. dollar.

Both should be temporary effects, he said, and “we expect to come back and move towards 2% over a couple of years.”

Mr. Fischer spoke at an event hosted by the International Monetary Fund and moderated by Jon Hilsenrath, chief economics correspondent of The Wall Street Journal.