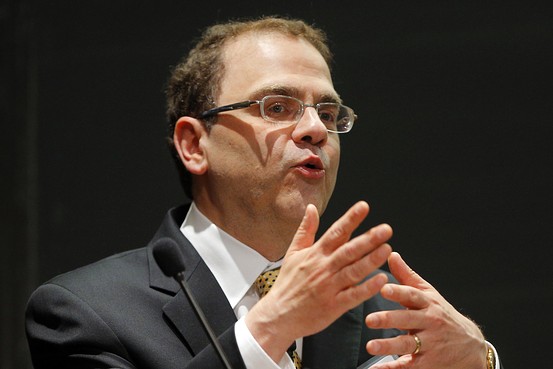 “I would expect that as we move forward, we’re going to see low interest rates by historic standards,” Mr. Kocherlakota said in response to audience questions following a speech in Eau Claire, Wisc. “That’s going to translate into more volatility in asset prices,” he said.

The official’s view that historically low rates could unsettle stock and bond markets has been aired before in speeches by Mr. Kocherlakota. The official said in remarks last week that right now, he sees nothing in asset markets that would warrant the Fed following a different path when it comes to its interest-rate policy.

Mr. Kocherlakota also said in response to audience questions that he doesn’t believe the sharp drop in gasoline prices will be sustained at its current pace.

In his formal remarks, Mr. Kocherlakota repeated his belief that a U.S. central bank rate increase next year would be a mistake. Inflation is unlikely to reach the Fed’s 2% target until 2018, and because of this outlook, “it would be inappropriate for the [Federal Open Market Committee] to raise the target range for the fed funds rate at any such meeting” occurring in 2015, he said.

Mr. Kocherlakota is a voting member of the monetary policy-setting FOMC, which met at the end of October in a meeting that saw officials continue to predict short-term rates will stay very low for a “considerable time.” Officials also changed their economic outlook in a way that suggested the Fed is getting closer to raising interest rates. Mr. Kocherlakota dissented against the FOMC decision.

Regarding the Fed’s current interest rate guidance, he told the audience, “I would have preferred to say something along the lines of we will not begin to raise rates at least until, we will wait at least until the one to two-year ahead inflation outlook is 2%” before beginning to act.

Mr. Kocherlakota said he’s worried that there’s been some “material slippage” in where the public expects inflation to go. To counter the drop in inflation expectations, he said “I felt that it was important for us at this meeting to send a strong signal of our commitment to getting back to 2% over the next– over a relatively short time horizon.”