Mr. Lacker was speaking in Charlotte, N.C., as part of a panel discussion followed by questions from reporters. The official will gain a vote on the monetary-policy setting Federal Open Market Committeenext year. Most central bankers reckon the Fed will raise rates in 2015, with key officials favoring an increase around the middle of the year, assuming the economy performs as they expect. 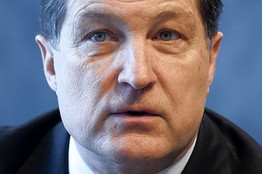 “I support the characterization that we can be patient at this point and that characterization could change from meeting to meeting for me,” Mr. Lacker said. When it comes to boosting rates, it will come down to the data, he added.

“My sense is that growth has a better chance of picking up on a sustained basis this time,” Mr. Lacker said. As for deciding when to raise rates, “I’m looking for information that has to bear on how sustained that growth trajectory we’re on is going to be,” he said.

Mr. Lacker also cautioned it is important for the Fed to raise rates before inflation pressures rise too much.

The Richmond-based central banker has frequently been skeptical of aggressive Fed actions to spur better growth and hiring, and he has frequented worried Fed policies could set the stage for a future inflation surge.

What’s the Difference Between ‘Patient’ and ‘Considerable Time’?