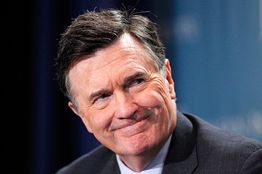 Federal Reserve Bank of Atlanta President Dennis Lockhart said Thursday that unexpected economic weakness over the start of the year means it will likely take longer to gain enough confidence in the outlook to raise short-term interest rates.

Given how the economy has performed thus far, “I think waiting a while longer improves the chances of seeing confirmation from incoming data that the economy is on the desired path,” Mr. Lockhart said in a speech given to a local group in West Palm Beach, Fla.

In contrast with recent remarks that suggested the Fed’s mid-June meeting would open the door to discussions about raising rates off of their current near-zero levels, Mr. Lockhart offered no guidance in his comments about when the Fed might act.

Speaking to reporters later, Mr. Lockhart said a June rate increase wasn’t “off the table,” but was “not my preference.” He also said, while observers tend to obsess about when rates will begin to rise, they should focus as well on the subsequent pace of increases. If rates rise rapidly, that could cool the economy, he said. For that reason, the Fed prefers a more gradual path of increases, he said.

Mr. Lockhart is a voting member of the monetary-policy-setting Federal Open Market Committee. He is widely viewed as a centrist on the FOMC, with views that are a reliable guide to the future of policy making.

Mr. Lockhart spoke as expectations of central-bank policy are in flux. Weak data over the start of the year and a deceleration in what had been a very robust pace of job gains are causing a number of officials to question the push toward higher short-term rates.

In his comments to reporters, Mr. Lockhart attributed cautious consumer spending to households seeking to increase savings or pay down debt. He said that although he expected lower gas prices to boost consumption eventually, that has not occurred in any measurable way so far.

While most officials appear to believe the weakness seen so far this year is likely temporary, they want to be sure that is the case before taking the momentous decision of boosting borrowing costs. At the same time, Fed officials are still dealing with inflation that falls well short of their 2% target, something that has happened now for nearly three years.

Mr. Lockhart told reporters that he expects inflation to rise in the second half of the year, but that “direct, affirmative evidence” of that was unlikely to arrive by early summer. “A murky economic picture is not an ideal circumstance for making a major policy decision,” he said.

Mr. Lockhart said there are degrees of certainty he can operate under, but he would like to have more confidence the weakness will be short-lived. And it could take some time to arrive, he said.

“In a timeframe of a few months, I don’t place equal probability” of having conclusive evidence the economy remains on a strong path, Mr. Lockhart said. “I expect it will take longer for direct, affirmative evidence to appear that would validate a decision to begin raising rates,” he said.

So far, “I do not believe the economy in some fundamental way is faltering, stalling, slowing—pick your description,” Mr. Lockhart said. He said he expects the pattern of 2014 is likely being repeated, and he expects growth moving back to a 2.5% to 3% rise, with more declines in the jobless rate.

But Mr. Lockhart cautioned “this forecast leans heavily on the assumption that recent weakness is a passing phenomenon,” and he wants to see confirmation in the data that the projection is correct.