Federal Reserve Bank of Philadelphia leader Charles Plosser said in a statement Friday the U.S. central bank is failing to make its monetary policy stance truly dependent on how the economy performs.

Mr. Plosser’s comments came from a statement that explained why he cast a dissenting vote against the Fed monetary policy statement released Wednesday. That document said the Fed could be patient when considering the timing of rate increases. 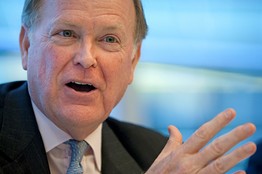 Mr. Plosser joined with Dallas Fed leader Richard Fisher in voting “no” to the statement given that both men believe the timing of future rate increases likely lies closer than what most officials believe. Minneapolis Fed President Narayana Kocherlakota dissented as well, saying weak inflation argues against the Fed’s slow move toward lifting rates off of near-zero levels.

“Whether saying we will be patient or we will wait a considerable time, the language continues to stress the passage of time as a key determinant of policy,” Mr. Plosser said. “Such date-based forward guidance is problematic since policy should be determined by the data,” he said.

Mr. Plosser again repeated his belief that by many traditional policy-making metrics, the time for rate rises has arrived. Most key Fed officials reckon the first rate increase won’t happen until the summer, and Mr. Plosser worries this will be too late.

“I believe that waiting too long to initiate a gradual increase in rates could result in the need for more aggressive policy in the future, which could lead to unnecessary volatility and instability,” Mr. Plosser warned.

Mr. Plosser is scheduled to retire from the Fed next year, and has cast his last vote on the FOMC.

What’s the Difference Between ‘Patient’ and ‘Considerable Time’?