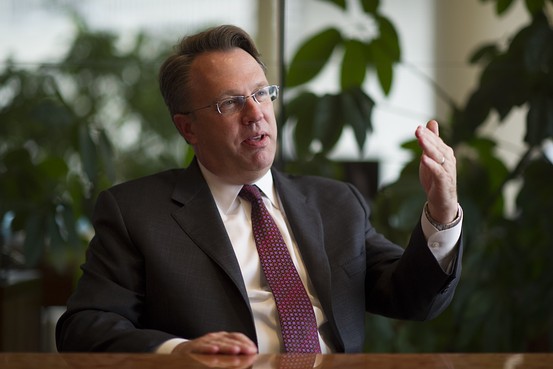 Speaking in Honolulu, the official reiterated that this positive outlook for the economy means that the Fed is getting closer to the day when it can raise short-term interest rates. Such an action would amount to reducing the amount of stimulus the central bank is providing, rather than a switch to policy designed to slow the economy’s momentum, he said.

Mr. Williams spoke as central bankers are preparing to meet in the middle of this month to deliberate on monetary policy. While no action is expected at the upcoming Federal Open Market Committee meeting, a number of officials have said that with the mid-June Fed meeting, the door to raising rates likely will be open.

“I’m not making a prediction about what the Fed will do,” Mr. Williams said in the text of his speech. But, “assuming that things unfold along the lines I’ve forecast, I think that by midyear it will be the time to have a serious discussion about starting to raise rates.” In describing what a rate increase would mean for him, he said that “there’s a difference between easing off the gas and applying the brakes.”

The policy maker, who has a vote on the monetary-policy-setting FOMC, was decidedly upbeat about the economy.

“The economy is showing solid momentum, and there’s good news in virtually every sector. I expect growth to be just under 3% in real GDP nationwide,” he said.

“We will reach maximum employment by the end of this year, if not sooner,” Mr. Williams said, adding that “there’s a good chance we could see the unemployment rate fall below 5% sometime later this year or next year.”

As the job market grows, it almost certainly will push inflation up. Mr. Williams noted that very weak price pressures right now, relative to the Fed’s official 2% target, are mainly the product of a huge drop in oil prices and a strong dollar that is blunting import prices. Those forces over time will be overwhelmed by developments in the job market.

“As the unemployment rate goes from the mid-5s down to the low 5s over the rest of the year, we’re going to see a labor market that’s much stronger, which will spur wage and price growth, which, in turn, will overwhelm some of the other factors that have been pushing inflation down,” Mr. Williams said.

It could take a while to get inflation back up to 2%, the official said, adding that in such an environment, the Fed needs to look ahead, because it can’t wait for price rises to hit the official target before raising rates.

“By waiting until we’re face-to-face with 2% inflation, we could drastically overshoot the mark—winding up in that metaphorical intersection or even fully running the red light,” Mr. Williams said. “I see a safer course in a gradual increase, and that calls for starting a bit earlier.”