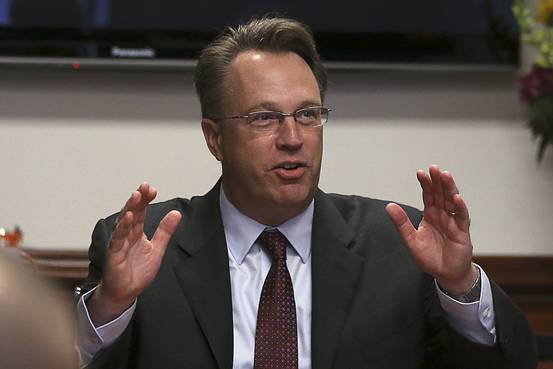 “Things are looking better–in fact, they’re looking downright good,” the official said in a speech to be delivered to an audience in Sydney and Melbourne via video.

Given how much the economy has improved and is likely to continue to gain ground, “I think that by mid-year it will be the time to have a discussion about starting to raise rates,” Mr. Williams said.

The strength of the U.S. dollar against a “broad index” of currencies is not an impediment to the U.S. economy reaching real GDP growth of 2.5% this year, he said.

“The U.S. economy has good momentum…even with what is a rather large appreciation of the U.S. dollar,” Mr. Williams said.

“The goal for me is just to get the economy back to full employment, get inflation back to 2.0% and get interest rates back up as appropriate, back to more normal levels,” he said.

The official’s views squared with those he’s made in recent public comments.

Mr. Williams is a voting member of the rate-setting Federal Open Market Committee. His speech was his first since the Fed met last week in a gathering that opened the door further to rate rises.

The FOMC clearly signaled an active debate over pushing rates up off their current near zero levels starts with the mid-June gathering, although no timing of action was predicted.

In a view shared by Mr. Williams, the Fed again argued central bank policy will be driven by the data.

In his speech, Mr. Williams said it was important for the Fed to make policy with a long view of the outlook. He said the Fed can’t wait to hit its job and inflation objectives before acting. Acknowledging that inflation remains well below the Fed’s 2% target, Mr. Williams cautioned that “by waiting until we’re face-to-face with 2% inflation, we could drastically overshoot the mark” and have to boost rates much more dramatically then would be the case if officials started earlier.

Mr. Williams also said when rates go up, they’ll be doing so from such low levels it will be a long time before Fed policy creates real drag on growth.

“I’m not talking about instituting tight policy, I’m talking about taking a first step in pulling back somewhat on what is a very high degree of accommodation,” he said, adding “no one should worry that we’re pulling the rug out from underneath the economy.”

Mr. Williams was upbeat about the economy. An economy showing “solid momentum” should grow by 2.5% this year, and what is now a 5.5% jobless rate should fall to around the “full employment” level of 5.2% or even under 5% by year’s end or sooner, he said.

The performance of the job market gave Mr. Williams confidence inflation will rise back to target. “I’m actually quite confident that we’ll be able to reach our 2% target within the next few years,” he said.

“I expect wage pressures to build and price pressures to return to more normal levels over the course of the next two years,” which will push inflation higher, Mr. Williams said.

The official downplayed the strength of the dollar, the vigor of which has concerned some who fear it could blunt the economy’s momentum by lower exports. The dollar’s value reflects “relative” strength compared to a weak overseas economic environment, he said.

–James Glynn in Sydney contributed to this article.