Fewer People Are Quitting Their Jobs, And Why That’s Not Good – Real Time Economics 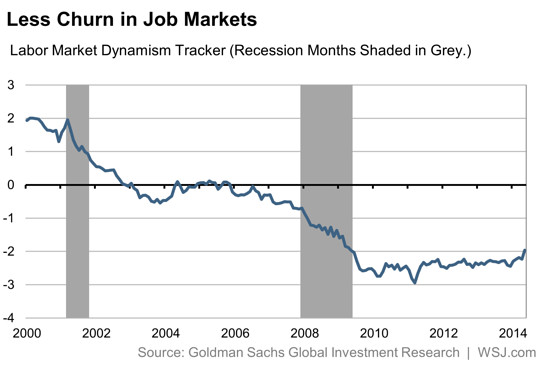 Payroll growth finally has taken off this year, rising solidly above 200,000 jobs per month in the first six months.

But what lies beneath the headline number says a lot about the economic outlook. Economists at Goldman Sachs set out to gauge how dynamic the current labor markets are. What they found is there’s much less job movement than there would be in a fully healthy economy. Businesses adding and losing workers and people quitting and taking other jobs–what economists call “churn”—are generally good measures of economic confidence.

Goldman constructed a labor-market dynamism tracker using data from a range of government sources. They took the hiring and separation rates in the Job Openings and Labor Turnover survey, the sum of the gross job-gain and job-loss rates from the Business Employment Dynamics report, and the share of workers making job-to-job transitions in the employment report‘s household survey. (The tracker prior to the mid-1990s relies on annual household survey data.)

The tracker finds labor-market dynamism “has fallen substantially since 2000.” Dynamism rebounded only weakly in the last two recessions, compared to much stronger bouncebacks following the recessions in the 1980s and 1990s.

Companies are laying off far fewer workers, but the hiring rate has recovered only partly from the recession. People are quitting less often, and workers show a greater tendency to stay put. Although some of the reduced churn reflects structural effects, “the decline seems mostly cyclical in nature,” writes David Mericle, a U.S. economist at Goldman.

Workers may stay put in jobs that don’t use their skills to the best effect. That mismatch reduces an employee’s ability to negotiate pay raises and also reduces his or her productivity. In addition, the Goldman report notes other research showing a large share of an individual’s wage gains comes from switching employers.

“A labor market with little turnover is naturally more difficult to enter for those not currently employed,” Mr. Mericle writes.

According to Labor Department data, in this recovery, the longer a person is out of work, the lower the chances of finding a new job. In addition to the personal and government costs of long-term unemployment, a large number of permanently unemployed workers reduces the U.S. economy’s potential output.

Add that drag to weaker wage and productivity growth, and it’s easy to see why the Federal Reserve is concerned about labor-market churn.

“We suspect that such concerns lie behind Chair[woman Janet] Yellen‘s inclusion of the hiring and quits rate in her ‘dashboard’ of labor market indicators,” Mr. Mericle concludes.

Indeed, Ms. Yellen’s dashboard is why Tuesday’s Job Openings and Labor Turnover report, once an also-ran among economic data, has become a must-read release among Fed watchers.