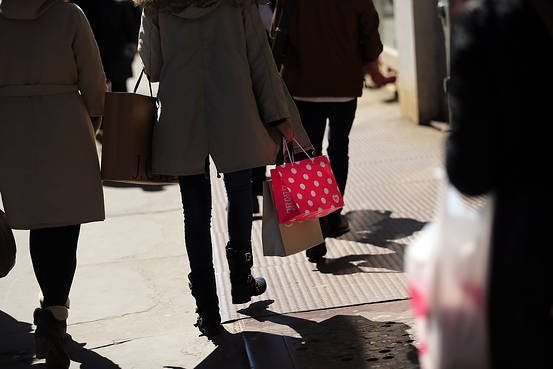 Economists have been optimistic with their estimates for retail spending, and in March are forecasting a spending spree.
SPENCER PLATT/GETTY IMAGES

Economists look back at March and see a spending spree. But they have expected too much from U.S. shoppers in recent months.

The Commerce Department will release its tally of March retail sales Tuesday. Economists surveyed by The Wall Street Journal forecast total sales jumped 1.1% last month, and were up 0.7% excluding autos. The control group of sales—which excludes vehicles, building materials and gasoline and which figures into gross domestic product—is expected to post a strong 0.5% increase.

Such high expectations risk a big miss. In fact, economists as a group have been too optimistic in each of the last three months. The biggest error was for February when the median forecast expected a 0.2% gain but sales dropped 0.6%. 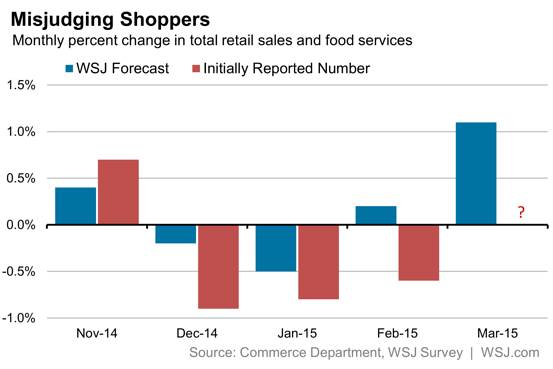 Why the upbeat March outlook? Automakers have already reported a jump in vehicles sales. Sales at gasoline stations probably increased, reflecting a gain in gas prices. (Retail sales are reported in nominal dollars.) Better weather in March versus February probably also brought consumers out. In addition, Easter landed in early April, causing some consumers to stock up on candy (marshmallow peeps!), apparel and decorations in late March.

Lastly, it’s hard to see Americans shoppers staying home after cutting retail spending for three consecutive months.  In fact, triple declines in retail sales are extremely rare. After all, households are enjoying a windfall from cheap gasoline. “We expect households to have spent savings on gasoline from prior months on other goods and services, boosting control group sales,” economists at BNP Paribas wrote in a research note.

Against all the long list of reasons for a spending splurge, the arguments for caution are few. Job growth downshifted in March. Consumer sentiment about the economy fell in both February and March.

Still, economists have raised the bar for Tuesday’s retail numbers. Even a solid gain of 0.5% might be viewed by investors as a sign of economic weakness. Taking a longer view, a small gain in March store sales would add fodder to the idea that U.S. consumers–scarred by the financial crisis–are no longer the shop-til-you-drop engine of growth.