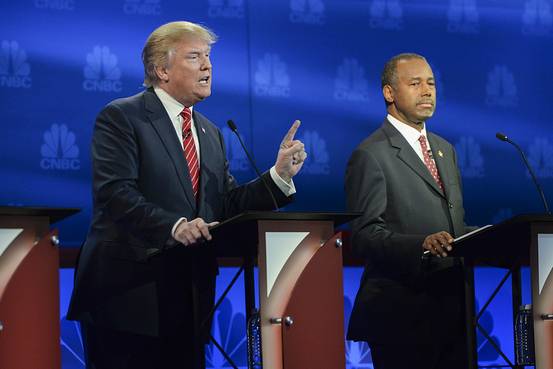 Ohio Gov. John Kasich said some of the proposals from Donald Trump, left, and Ben Carson, right, who are leading in the polls, indulged in fantasy: “These plans would put us trillions and trillions of dollars in debt.”
MATTHEW STAVER/BLOOMBERG

Wednesday’s Republican presidential debate had been promoted as a discussion of economic policy but often veered into other lanes, such as fantasy football regulation, Florida Sen. Marco Rubio’s attendance record, and the seriousness of Donald Trump’s campaign.

Still, the debate offered a few policy highlights. Here’s a look at five of the more revealing exchanges:

Mr. Paul said Medicare was paying out around 2.5 times more per person than it had collected, raising an important point about demographics. “We have this enormous mismatch because we have smaller and smaller families,” he said.

Messrs. Bush and Christie have both made the case that Social Security will need to be reoriented towards a program that offers a more progressive payment structure. “The simple way to do it is to make sure that the wealthiest don’t receive the same benefits as the people that are lower-income,” Mr. Bush said.

Mr. Christie sold the idea as a way to avoid higher payroll taxes: “If you’ve done extraordinarily well in this country, do you want them to take more out of your taxes now and think they’re going to give it back to you later? Or would you rather take less later on?”

The idea was strongly criticized by former Arkansas Gov. Mike Huckabee. “The government has no business stealing even more from the people who have paid this in,” he said.

Several presidential candidates have advanced various tax overhaul proposals, and most of the disagreements here aren’t over whether to lower taxes but how quickly and aggressively to do it. Carly Fiorina said she would reduce the tax code to three pages because that is “about the maximum that a single business owner or a farmer or just a couple can understand without hiring somebody.”

Ohio Gov. John Kasich said some of the proposals from Mr. Trump and Ben Carson, who are leading in the polls, indulged in fantasy: “These plans would put us trillions and trillions of dollars in debt.”

Texas Sen. Ted Cruz and Mr. Paul both got their licks in at the Federal Reserve. Mr. Cruz called the Fed a “star chamber” that needed a bipartisan commission to consider restoring rules-based monetary policy. While official inflation gauges have remained subdued in recent years, Mr. Cruz said the cost of certain groceries and household bills have gone up much faster than wages.

“And loose money is one of the major problems. We need sound money,” Mr. Cruz said. “And I think the Fed should get out of the business of trying to juice our economy and simply be focused on sound money and monetary stability, ideally tied to gold.”

Mr. Rubio took a question about visas for high-skilled immigration and turned it into a call to overhaul higher education and skills.

“We need to get back to training people in this country to do the jobs of the 21st century,” he said. “Why, for the life of me, I do not understand why did we stop doing vocational education in America.”

Mr. Rubio said that more technology companies had relied on immigration because training and education had suffered in the U.S. “The ideal scenario is to train Americans to do the work so we don’t have to rely on people from abroad,” he said.

Mr. Kasich said the problem of higher student debt wouldn’t be addressed until education costs could be contained. He recommended using more online tools to reduce service costs and to make it possible for high school students to complete college coursework.

He also endorsed proposals that would tie federal aid to universities to course-completion rates for students. And for those students who do graduate with more debt, he said, “We can seriously look at an idea of where you can do public service…and begin to pay off some of that debt through the public service that you do.”