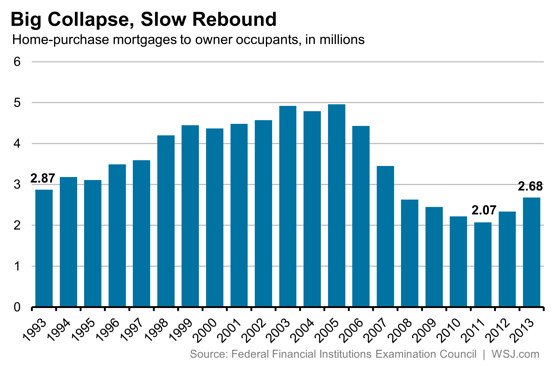 The Home Mortgage Disclosure Act requires mortgage lenders to disclose a range of data around every mortgage application that they take in a given year. The Federal Reserve on Monday released its summary of the previous year’s data. Here are five broad findings:

1. Even though purchase lending was up 13% last year for the second straight year, loans for owner-occupied homes were still below every year from 1993 through 2007.

2. And despite the good news that purchase lending increased last year, the gains were heavily concentrated among the most affluent borrowers, leading to pronounced disparities along racial and ethnic lines. Loans to Asian and high-income borrowers grew 42% and 50%, respectively, from 2011 to 2013. Loans to African-American borrowers were up just 12%, and loans to low- and moderate-income borrowers rose just 7%. 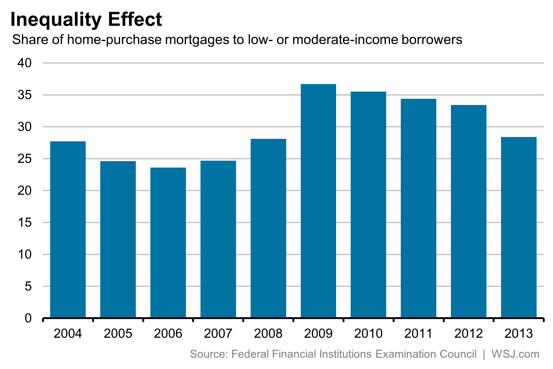 3. Denial rates didn’t see a big change in 2013. Some 14.5% of home-purchase loan applications were denied, about the same as 2012. But don’t read too much into denial rates, as they can tick up when lending standards ease and they can fall when lending standards are tight. This is what happened during the bubble. Easy standards in 2005 and 2006 drew more unqualified borrowers to consider applying for a loan, leading to more rejections.

A good analogy here would be airport security. The fact that airport security screeners are confiscating fewer prohibited items doesn’t necessarily mean air travel is getting safer, but it does show that passengers are adjusting to the new security regimen. The same can be true with mortgage lending. Borrowers may not apply for loans if they don’t think their chances are very good of getting them, leading to a lower denial rate.

Denial rates were highest among African-Americans (25.5%) and Hispanics (20.5%). The denial rates for non-Hispanic whites, meanwhile, stood at 12.2%.

4. Sharp increases in fees charged by the Federal Housing Administration have resulted in continued declines in the share of FHA-backed mortgages. The share of loans for owner-occupied home purchases backed by federal agencies, the largest of which is the FHA, stood at 38% last year, down from 45% in 2012 and 54% in 2009.

5. Western states with the biggest home-price busts saw the weakest growth in home purchase lending last year. California and Nevada witnessed lending growth of less than 5%. Meanwhile, states that largely avoided a big runup in prices saw strong growth. Lending jumped more than 30% in Montana and 20% in Idaho and South Carolina, well ahead of the national average of 13%.