Floods in the Balkans: Fears of another surge 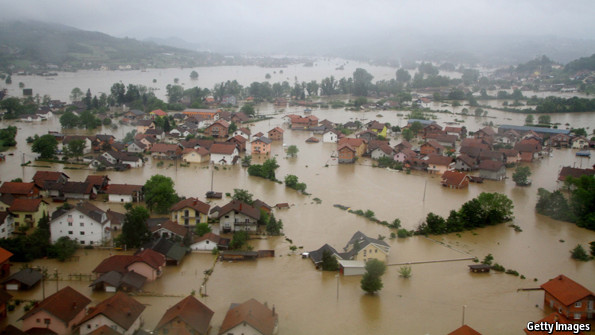 MUCH of Serbia, Bosnia and eastern Croatia are under water. Flood maps marking the affected areas make it look as though a vast inland sea has suddenly appeared across the region. Tens of thousands of people have been evacuated. In Serbia some 300,000 do not have access to clean water or electricity. One third of Bosnia, home to 1.2m people, has been affected by the floods. So far the number of dead in Serbia and Bosnia is believed to be just under 50, a toll likely to rise.

Obrenovac, a power plant in Serbia which supplies electricity to Belgrade and a large part of the rest of the country, is at risk. In Bosnia, there have been fears that some 120,000 mines left over from the war, but whose location is generally known, could now shift. Landslides are hampering the work of rescue teams.

In only a few days around three months’ worth of rain has fallen, so even the most prepared of countries would have been in trouble. So far emergency systems in Serbia and Croatia appear to have worked relatively well, but less so in Bosnia. Help is coming from across the region, the rest of Europe and Russia as well as Israel and Turkey.

According to Daniel Sunter, a security analyst in Belgrade, the reaction of the military and police has been good but hampered by a lack of equipment. The Serbian military have only eight transport helicopters, six of which date from the Tito era. Tens of thousands of ordinary people are volunteering to help across the region, to build barriers, to shelter those who have been flooded out of their homes and to collect aid. “I have never seen anything like this before,” said Mr Sunter. In Obrenovac, asylum seekers, from countries such as Syria, who tend to be much maligned, have been helping the rescue effort.

The trauma of the floods has triggered a wave of solidarity across the former Yugoslavia. Croatian and Slovene military helicopters are flying rescue missions in Bosnia. Croatian police are helping rescue the stranded in Obrenovac and a Slovene civil defence emergency team is helping pump water from the power plant there. Soldiers from Montenegro and Macedonia have also been sent to help and money and aid is being collected in both countries. Help has been offered by the Kosovo authorities too but so far it has not been accepted.

Although the water has begun to recede in some areas there are fears of more surges coming down the Sava, a river, which marks the border of Croatia and Bosnia and which flows into the Danube at Belgrade. Further down the down Danube, between Romania and Bulgaria, which have only suffered minor floods so far, surges are expected between May 22 and 23rd.

For now everyone is concentrated on saving lives. Soon however, questions will be asked whether Bosnia’s dysfunctional state has left the rescue operation fragmented.  “Volunteers have been organising themselves, some reporting to the fire brigade and other working independently,” says Dusica Ikic-Cook, a business administrator from Tuzla in north-east Bosnia. In Serbia questions will be asked why the authorities did not realise sooner the danger of the situation in Obrenovac. A few hours after people were told to stay at home it became clear that they would have to be evacuated.

The Patriarch of the Serbian Orthodox Church and another senior churchman have used the floods to attack the country’s lesbian and gay community and Conchita Wurst, the bearded Austrian drag queen who won the Eurovison song contest on May 10th. They claim that the floods were a punishment from God for their vices.