The Federal Reserve has just experienced a good deal of turnover, with four governors, including former Chairman Ben Bernanke, departing in the past year. Janet Yellen has taken leadership of the central bank along with Stanley Fischer who was confirmed last week as vice chairman. Add a change of leadership at the Cleveland Fed, and the committee looks quite a bit different than just last year.

Yet thanks to the long tenures of Fed officials, the vast majority of the current committee could now remain in place, in their current roles, through at least 2018. 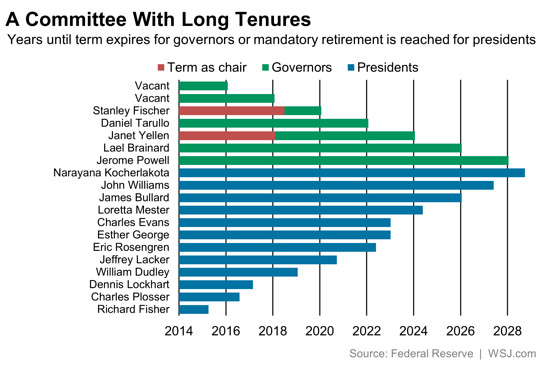 A few explanations and caveats: First, the Fed’s governors are appointed to staggered 14-year terms, but it’s become rarer and rarer in recent years for governors to actually serve out the duration of their terms. Some, like Jeremy Stein who departed after two years in order to retain tenure at Harvard University, return to academia. Others, like Sarah Bloom Raskin who became Deputy Treasury Secretary, undertake new roles in government. The last two governors actually to stay in the role for more than a decade — Alan Greenspan and Edward Kelley — were both appointed by Ronald Reagan.

Second, Yellen and Fischer have shorter terms as chairs than they do as governors. Though technically they could stay on as mere governors after their terms expire, this would be unlikely unless they were reappointed and reconfirmed. Their current terms both last through 2018, so such decisions remain remote and will be the responsibility of President Barack Obama‘s successor.

The Fed’s Board of Governors currently has two vacancies (as well as a vacant vice chairman of supervision since the post was created). Those seats, however, will have very short terms expiring in January of 2016 and 2018. Most of the current committee would outlast whoever moves into those roles. (But these governors could remain in office after their terms expire, if their successor is not yet appointed.)

Fed Presidents have a different system of tenure. They are technically appointed to five-year terms through the last day of February in every year numbered 1 or 6 (i.e., 2011, 2016, 2021). So all have to win reappointment by February 2016. But in practice, presidents are generally reappointed until they hit mandatory retirement. Per the Federal Reserve Act, retirement is required at age 65 or after 10 years of service as Fed president, whichever comes later.

The presidents, too, can certainly choose to retire before serving out their full 10 years or reaching 65. They’ve proven somewhat more likely than the governors, however, to stick around. Former Kansas City Fed President Thomas Hoenig and former Minneapolis Fed President Gary Stern both had two-decade tenures at the central bank.

So some new faces could show up earlier and some could linger a bit later. Congress could rewrite the Federal Reserve Act to change these rules. But in all likelihood, most current Fed officials will have the option to serve and implement their preferred policies, at their leisure, for at least four years if not into the next decade.