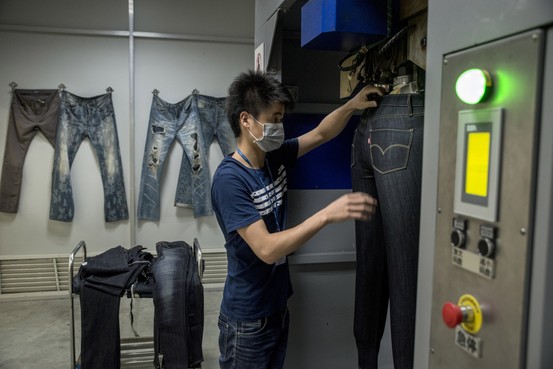 At the Crystal factory in Zhongshan, Guangdong, China, a worker places a pair of Levi jeans in a laser machine, where it will get a worn, faded look. The new technology replace the traditional “sanding” done manually by workers.
GILLES SABRIÉ FOR THE WALL STREET JOURNAL

SAN FRANCISCO—A half century ago, teens would slide into their cardboard stiff new Levi jeans, squat again and again, shake them out and toss them into washing machines to get them comfortable enough to wear. Then they’d wear them until they fell apart and (sometimes) sew patches over the holes in the denim.

Now Levi Strauss & Co. uses an awful lot of design and technology to produce similar effects. The beat-up pants command higher prices and margins. Technology is not only replacing ever-more-expensive labor but ever-more-busy consumers who don’t have the time to break in their jeans.

In a sprawling factory in Southern China that makes Levi jeans, a metal contraption called a bladder holds a pair of blue jeans upright while tiny lasers burn off the top layer to give the denim a distressed look. The more tatters and tears on the jean, the more complex it is to make.

A pair of jeans with tears on both knees and patches throughout would be rated G5 by Levi in its internal system, indicating that it’s the most complicated to manufacture, while a basic pair of blue jeans would be rated G1, for simplest.

On the other side of the world, in a converted grain mill next to Levi’s brick San Francisco headquarters, dubbed the Eureka Center, about 25 designers and technicians figure out new ways to batter jeans.

Instead of washing the pants in washers packed with pumice stones or chemicals to soften and bleach them, as has been done for years, Levi is experimenting with tumbling jeans in machines filled with ozone. The gas also bleaches the denim, but without having to use water, an important consideration for Levi, which operates in countries like Mexico or China where water is either scarce or polluted.

Producing a stylish look is a “blend of art and science,” said Bart Sights, the intense 50-year-old Eureka boss, who wears black T-shirts and polishes his fingernails black.

There’s a fair measure of obsession involved, too. Not far from the Eureka Center, Levi has an “archive” of beat-up jeans, wrapped in tissue paper as if they were museum artifacts, which cowboys, miners and laborers once wore. Much of the blue in the blue jeans is worn away. There are holes everywhere, particularly at the hem, where cowboys would have worn stirrups. These jeans become the models for the firm’s “Vintage” line of jeans, which retail for about $250. Levi’s lasers burn away bigger patches of denim to replicate a cowboy look.

The San Francisco center is in regular touch with the development centers of Levi’s many contractors around the world, which manufacture nearly all of Levi’s jeans. At Apparel International Inc.’s research center in Torreon, Mexico, which AI calls “the Playground,” jeans technologists amp up their lasers to burn holes into the jeans. Other workers use air guns to separate the white cotton fibers that remain and stretch across the holes. Automated sewing machines produce elaborate stitching on patches, which seamstresses then sew onto the jeans.

How does Levi know what kind of beat-up look might sell? The company takes “street-style shots” around the globe, said Liz O’Neill, a Levi senior vice president. She said Levi noticed “an increase in the number of consumers with intentional destruction, and patch and repair,” and started to reproduce the look.

David Reyes, who runs the Mexican Playground, an easygoing 58-year old who wears his thinning grey hair in a ponytail, tirelessly pursues new looks. He has tried washing jeans in the sand from local marble mines—French Frost, he dubs the process, because he thinks the sand looks like snow—foam, liquid carbon dioxide and ozone. The different processes bleach the jeans in different ways. He hopes that one of the looks is cool enough to interest Levi jeans designers.

Ms. O’Neill said that “finishing” jeans accounts for 35% of the cost of producing jeans, up from 20% a decade ago. (Fabric accounts for 50% of the cost; cutting and sewing for the remaining 15%, she said.)

There is no turning back. “Destruction is a pretty heavy trend,” she said.

As China’s Workforce Dwindles, the World Scrambles for Alternatives

China, Levi Strauss and the Long-Simmering Battle Over Labor Rights

How Demographics Rule the Global Economy