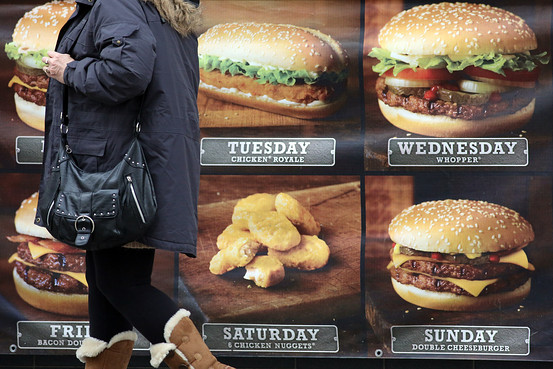 A woman passes an advertisement outside a fast food outlet last year in Bristol, England, when the government debuted a TV ad to promote healthy eating in England.
Getty Images

The study found that fast-rising obesity rates around the world are costing the global economy $2 trillion in health-care costs and lost productivity. It outlined a list of 74 obesity-fighting measures that have been successfully implemented in different countries.

In an attempt to measure the economic impact of a comprehensive anti-obesity program, MGI estimated the impact that 44 of these measures could have on the U.K., an example of a developed country with a fast-rising rate of obesity.

Through actions such as reducing portion sizes and limiting the availability of high-calorie foods, MGI believes the U.K. could halt the rising trajectory and return roughly 8.5 million overweight and obese people to a normal-weight category.

That outcome could provide the country with an economic benefit of $25 billion in the form of reduced health care costs and higher productivity.

The MGI study identifies portion controls as the most effective way to fight obesity, though these measures have often proved difficult to implement. Extensive lobbying and legal action by the soft drink and retail industries helped to block earlier this year a ban on supersize sugary drinks in New York City.