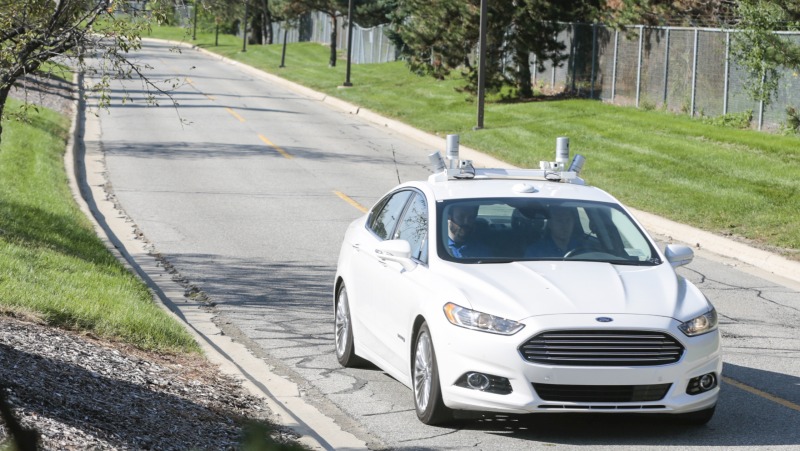 The video above gives you a taste of what the vehicle actually “sees” on its test route, thanks to a combination of cameras, radar and LIDAR units. Like other self-driving car demonstrations I’ve experienced, the Fusion could navigate the test route without much of a problem, responding to both simulated and live situations easily. The reason the company is waiting until 2018 to deploy its on-campus autonomous transports is partially due to the risk of the unexpected. Besides the scare stories of Tesla Autopilot crashes, in some of the demos the cars hesitated because of situations they weren’t quite ready to handle.

As Business Insider’s Henry Blodget noted while interviewing Fields, in one circumstance a pedestrian being too-police and waving the car through resulted in a standstill. The car wasn’t ready to move on its own, and people that aren’t used to seeing self-driving vehicles on the road that might not read a wave-through.

Still, Ford is going heavy into self-driving tech, with Fields saying he expects it to have as big of an impact as the assembly line did. That video of the data its cars are producing in real-time could even mean more to the future of Ford than the usual HP ratings, as customers increasingly value information and services, in addition to manufacturing and technology Similar to Uber’s self-driving test vehicles, Ford plans to make its first self-driving cars available as part of some type of ride-sharing/ride-hailing. CTO Raj Nair said in an interview that he was surprised by how quickly that market grew, but clearly, the economics are appealing as automakers get ready for a future where people might put more miles on cars that they don’t own.