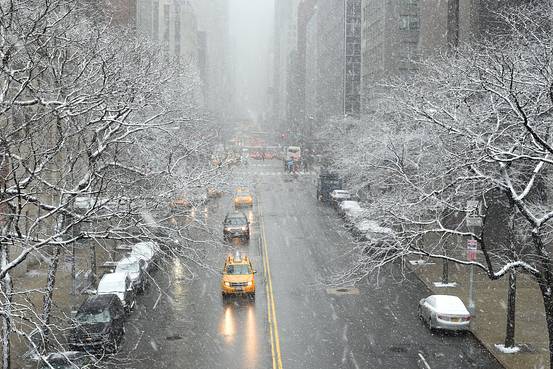 A cab makes its way across 42nd Street in the snow during the first day of spring in New York on March 20, 2015. Business economists expect strong consumer spending, housing investment and government spending will outweigh any slowdowns this year.
TIMOTHY A. CLARY/AFP/GETTY IMAGES

Business economists are shrugging off a winter economic slowdown.

A poll of 50 professional forecasters by the National Association for Business Economics estimated a 3.1% advance for gross domestic product this year, which would be the best performance in a decade and a marked improvement from the 2.2% to 2.4% range of the prior three years.

NABE released the survey, conducted Feb. 25-March 12, amid a string of weak real-time economic data. The Commerce Department on Friday said  GDP, the broadest measure of goods and services produced across the economy, expanded at a seasonally adjusted annual rate of 2.2% in the fourth quarter, a sharp slowdown from the third quarter’s 5.0% pace.

And GDP growth estimates for the first quarter tumbled last week after a disappointing report on business spending.  Consumer outlays also appears to be off to a sluggish start this year, hampered in part by bad weather and a disruption at West Coast ports. 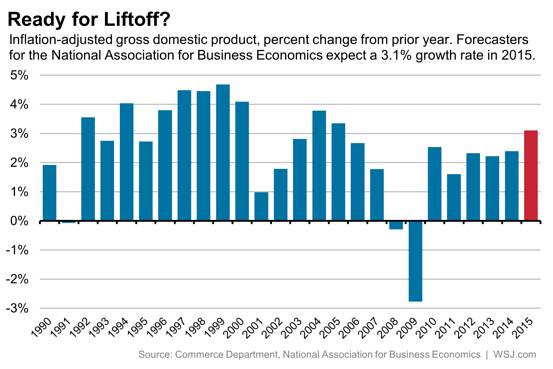 The latest survey upgrades nonfarm payroll growth to an average of 251,000 per month this year and expects the unemployment rate to average 5.4% for the year. Oil is expected to just creep up to $61 per barrel at the end of the year, helping keep inflation in check at a paltry 1.2%.

The U.S. added an average of 260,000 jobs a month last year and the unemployment rate in December was 5.6%. Oil peaked near $99 in mid-2014 before crashing to just over $45 earlier this month. Inflation was flat last month.

The stronger economic backdrop is one reason the Federal Reserve is expected to start raising interest rates in the second or third quarter of the year. The federal funds rate, pinned near zero since the end of 2008, is seen reaching 0.75% by the end of the year and 2% by the end of 2016. The survey was conducted prior to the latest Fed meeting, where officials opened the door to raising rates by midyear.