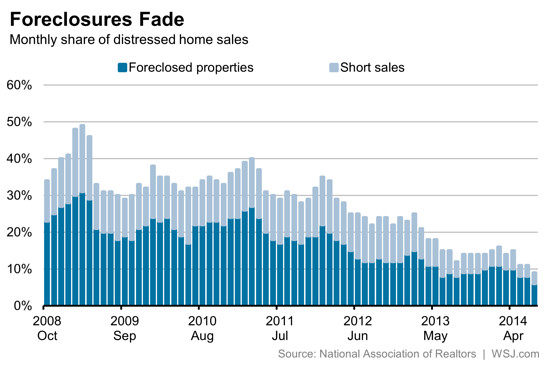 Thursday’s home-sales report offers the clearest evidence that the housing market is moving out of the emergency ward and into a rehab facility. But the big question right now is how long it will stay in that recovery unit.

The National Association of Realtors reported that home sales rose for the fourth straight month in July to the highest seasonally adjusted annual rate since last September.

But the real sign that the housing market is out of critical condition comes courtesy of a separate survey the NAR does of its members. That survey estimates the share of distressed home sales in July fell to 9% of all sales, the lowest level since the trade group’s tally began in October 2008.

Housing is far from full health. Construction of single-family homes is a shadow of its former self, even as rental construction has begun to exceed pre-crisis levels.

Last year’s jump in mortgage rates took a bigger bite out of demand than most economists had expected, and sales have firmed up in recent months in part because financing is still relatively cheap. Freddie Mac reported on Thursday that the 30-year fixed-rate mortgage fell to 4.1% last week, its lowest level so far this year.

As we wrote earlier this week, sales volumes have stumbled in markets like Phoenix in part because there are fewer foreclosed properties (or sales of rehabbed foreclosures that were being flipped by investors). Investors have also pulled back from the market as prices rise higher, making homes less affordable for the buy-to-rent businesses that grew quickly in 2011 and 2012.

Still, the drop in foreclosed-property sales deserves attention. Sales of non-distressed homes, using crude estimates derived from the NAR’s survey, are up slightly from a year ago. Prices are still rising, but not as sharply as they were a year ago. And higher prices could be drawing out more sellers. Inventories are at their highest levels in nearly two years—and this time, they appear to be rising because Joe and Jane Homeowner, not a bank or mortgage-processing company, wants to sell. 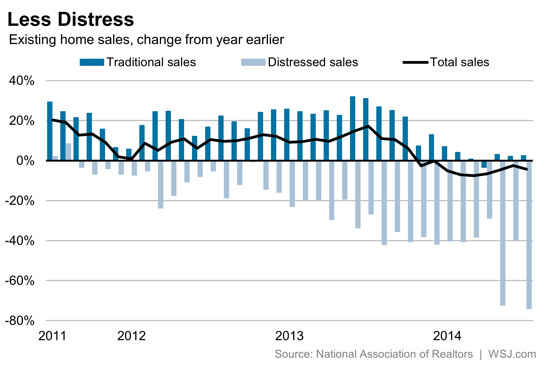