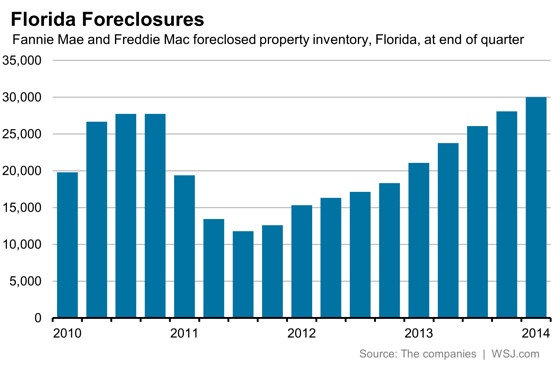 The volume of foreclosed properties held by Fannie Mae and Freddie Mac in the state of Florida reached a new high at the end of March, surpassing the previous peak reached at the end of 2010.

So is this a sign that the foreclosure crisis is getting worse? Not really.

To understand the new record, which was pointed out by housing economist Tom Lawler in a recent research note, it helps to have a handle on the ebbs and flows of the foreclosure process, which is governed by state law. Florida requires banks and mortgage companies to take back property through court.

The foreclosure crisis upended few states as badly as it did Florida. Making matters rose, banks have had a terrible record moving those properties through the state’s court system. In 2010, evidence surfaced to show that banks and their attorneys were routinely trying to pass off forged assignments and other substandard loan documentation to rapidly process growing backlogs of foreclosures. The slowdowns that resulted from this so-called “robo-signing” scandal were particularly acute in states such as Florida, where the courts oversee the foreclosure process.

Foreclosures dropped sharply throughout 2011 as banks withdrew cases to correct those foreclosure filings. Foreclosed property holdings at Fannie and Freddie dropped from around 28,000 as of October 2010 to less than 12,000 one year later. Inventories have grown steadily over the last three years, to surpass 30,000 at the end of March.

Many of the properties going back to Fannie and Freddie today are likely mortgages that have been delinquent for a long time, as opposed to newly delinquent borrowers, which would be an arguably bigger concern for the housing market.  Florida loans that completed the foreclosure process in the first quarter at Fannie hadn’t made any payments in more than 1,300 days.

The level of mortgages that are 90 days or more past due or that are in the foreclosure process in Florida is still high, at around 10.7% of all mortgages at the end of last year, according to the Mortgage Bankers Association. But that is down sharply from 32.4% of all loans nearly four years ago, as clear a sign as any that the foreclosure flood waters are finally receding.

Nationally, around 660,000 mortgages referred to foreclosure hadn’t yet completed the foreclosure process as of May. That’s down from 1 million such properties one year earlier, according to CoreLogic Inc., a data provider, or a drop of around 37%.