The proportion of home loans that entered foreclosure in the second quarter of this year hit its lowest point since early 2006, before the crisis began, according to data released Thursday by the Mortgage Bankers Association.

The low rate is another sign that higher home prices and an improving job market are helping to put the mortgage crisis in the rearview mirror, said MBA Chief Economist Mike Fratantoni. At the crisis’s worst point, in the third quarter of 2009, servicers started foreclosures on 1.42% of home loans. Last quarter, they began foreclosures on only 0.4% of loans, the lowest rate since the second quarter of 2006. 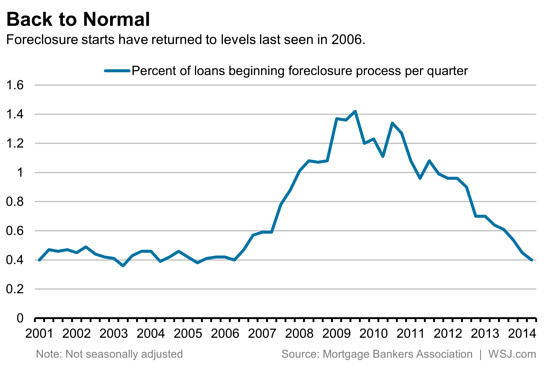 The delinquency rate–loans that have at least one late payment but are not in the foreclosure process—decreased to 6.04% after adjusting for seasonality, reaching its lowest level since the end of 2007.

Don’t celebrate just yet. Banks and homeowners still have a daunting backlog of already-foreclosed-upon homes to work through. In the second quarter, 2.49% of homes were in the foreclosure process, down from the peak of the crisis, but still well above the 1% or so rate before the crisis began.

The Mortgage Bankers Association found that some states have larger tasks ahead than others. While fewer than 1% of loans were in foreclosure in Virginia, Colorado and Arizona, in the first quarter, in New Jersey, more than 8% of loans were, a stat that will dog New Jersey Governor Chris Christie as he weighs a possible presidential bid.

The Mortgage Bankers Association found that nearly 7% of loans in Florida and almost 6% of loans in New York were in foreclosure.

The biggest stockpiles were in so-called judicial states, where foreclosures must be processed by local courts and tend to take longer.

Florida, New York and New Jersey in the second quarter accounted for more than 40% of all loans in foreclosure, which means that the foreclosure pipeline in those three states will have an outsize impact on national figures going forward, Mr. Fratantoni said.

One thing the falling foreclosure rate hasn’t yet done is lead banks to open the spigot for new mortgage lending. The MBA on Tuesday reported that mortgage credit availability loosened slightly in July but is still far depressed from 2004 levels, before the housing boom crested.