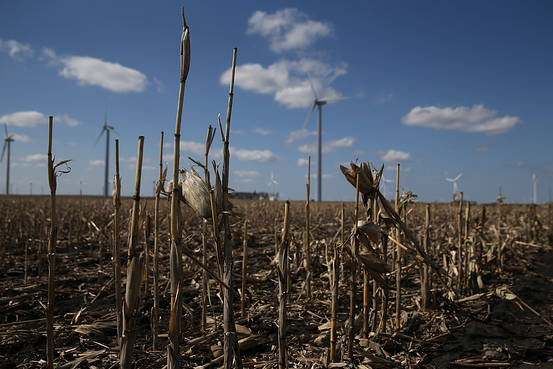 Most of the nation’s biofuels come from ethanol produced from corn in states like Iowa. A new report proposes several reforms to the renewable fuel standard, including some that will require congressional approval.
Justin Sullivan/Getty Images

A former White House economic adviser is calling for changes to a 2005  law mandating increased use of alternative fuels in the nation’s transportation supply, adding a key voice to a growing chorus of people who say the policy is not working.

In a report to be published Thursday, Harvard University professor Jim Stock, who served on President Barack Obama’s Council of Economic Advisers in 2013 and 2014, proposes several reforms to the biofuels mandate, known as the renewable fuel standard, including some requiring congressional approval.

The report adds to a growing body of politicians and experts who are questioning the law’s effectiveness amid regulatory uncertainty and lower oil prices.

Biofuels, mostly corn-based ethanol, have been blended into the nation’s gasoline supply since Congress passed the law a decade ago to promote the use of alternative fuels. But the government has struggled in putting together regulations and mandates for a more diverse offering of fuels, such as products made from municipal solid waste, plant material and biogas. Low gasoline prices, which are more than a dollar cheaper today than this time last year, are also making alternative fuels less cost-competitive.

Obama administration officials acknowledge that the law has been a struggle to enforce, though they have not said whether they think Congress should change it.

Mr. Stock’s report, which is being published by Columbia University’s Center on Global Energy Policy, whose founder, Jason Bordoff, is a former senior energy and climate adviser in the Obama White House, proposes ways to encourage more development of non-corn biofuels under the mandate.

“The renewable fuel standard has a bad name, and in some ways it’s a deserved bad name because of the very large costs associated with it,” Mr. Stock said in an interview Wednesday. “But I think it’s incredibly important we not lose sight of the big challenge we have in the transportation sector.”

Among his recommendations, Mr. Stock says the Environmental Protection Agency should be required to issue new blending standards every four years instead of annually. This change, which would require congressional action, “would provide investors with more guidance on which to make their decisions,” his report says.

The additional 21 billion gallons by 2022 are supposed to come from advanced biofuels made from non-corn products, but that sector is falling far short of producing what Congress had envisioned. The industry produced 1.9 billion gallons of fuel in 2014, with 1.7 billion gallons coming from biodiesel and 180 million gallons from other alternative fuels—far less than the 3.75 billion gallons the 2007 law had initially required for the year.

The EPA is almost two years behind issuing the requirements for 2014 and at least six months late with the 2015 requirements, partly a recognition that the biofuels market has not performed as the law assumed. Bound by a legal agreement announced last week, the agency is planning to propose the levels for 2014-2016 by June 1.

Mr. Stock said he decided to write the report because not enough people were calling to change the law while encouraging more support for biofuels made from non-corn products.

“The political process by itself does not have enough supporters of that constituency,” Mr. Stock said.