Floridians sign up for the Affordable Care Act in February. The nonpartisan Congressional Budget Office projects the law will cost the government 11% less than their forecast six weeks ago.
Getty Images

In the latest projection, published by the nonpartisan Congressional Budget Office on Monday, the major provisions of the law will cost the government 11% less than they forecast six weeks ago, or $142 billion over the coming decade.

Overall, the health-care law will now cost 29% less for the 2015-19 period than was first forecast by the CBO when the law was signed in March 2010. Back then, the CBO and the congressional Joint Committee on Taxation estimated that for the last five years of their 10-year projection, Obamacare would cost $710 billion. Now, they expect it will cost $506 billion for the same period. 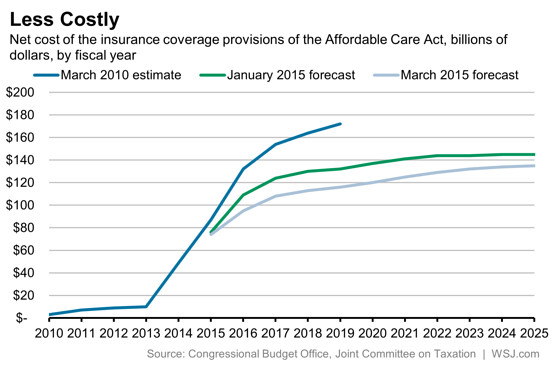 The CBO estimates the government will spend 20% less on subsidies provided to individuals who purchase health insurance through the federal health exchange, or around $209 billion in lower-than-projected costs over the coming 10 years.

The government won’t see all of that savings, however, because the CBO also estimates that the government will collect less money from taxes on certain high-premium insurance plans. The latest forecast now projects taxes on those so-called “Cadillac” plans will bring in 41% less money, or $62 billion in reduced revenues. The CBO forecast shows that in 2022, the tax will bring 71% less than projected in 2012.

The decrease in government spending on the health-exchange subsidies is linked in part to projections of slower growth in health care spending. The growth in private health insurance spending per enrollee over the 2006-2013 period averaged 1.8% per year, compared with an average rate of 5% per year during the 1998-2005 period, according to the report.

The slower growth in health care spending is attributed in part to the slow economic recovery and more insurance cost-sharing requirements like deductibles, which have prompted consumers to rein in their own spending on medical care. Medicare spending growth has also slowed.

The CBO report also decreased its estimate of the number of people who will be without health insurance to around 25 million, from its prior forecast of 27 million.

The report also reflects lower-than-expected enrollment in federal and state exchanges set up under the Affordable Care Act. The Obama administration said about 11.4 million people signed up for private insurance through the health law’s exchanges so far this year.

The CBO earlier estimated that 13 million people would enroll in private health plans in 2015 but has since lowered that projection.