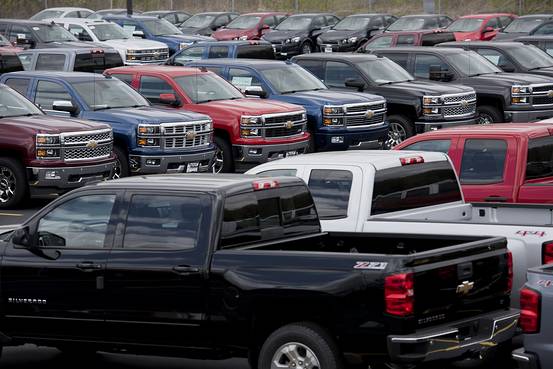 With gasoline prices heading into Labor Day at the lowest level in more than a decade, Americans’ enthusiasm for fuel economy is waning.

Google searches for “MPG,” shorthand for the fuel-economy measure miles per gallon, decreased 32% in the last week of August compared with two years earlier, according to the data from the technology giant. That nearly matches the 33% fall in the price for a gallon of regular gasoline during that time.

The Google data shows a tie between movements in gasoline prices and interest in “MPG.” When gas prices edged up this spring from winter lows, as is typical for the season, fuel-economy searches rose, even though gasoline prices were down almost a dollar from a year earlier. 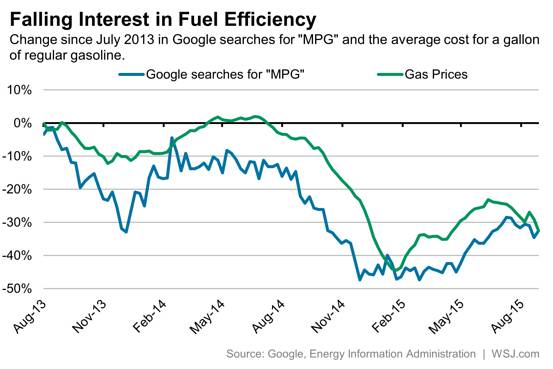 Interest on the Internet appears to be translating to dealer lots. U.S. auto dealers sold nearly 600,000 more sport-utility vehicles and pickup trucks through August, compared with the first eight months of last year, and almost 168,000 fewer cars, according to researcher Autodata Corp.

When gasoline prices held consistently above $3 a gallon for a four-year stretch between 2010 and last fall, Americans gravitated toward fuel-sipping cars. Small vehicles such as the Toyota Prius Hybrid and Ford Focus grew in popularity and automakers rolled out all-electric cars, such as the Chevrolet Volt and Nissan Leaf.

The “decline likely reflects the decreased price of gasoline in August, and the consequent increased sales of light trucks and SUVs,” said Michael Sivak, a Michigan researcher.

Sales data bears that out. Sales of the Volt, once viewed as a key element in General Motors’ postbankruptcy rebirth, fell 37% through August compared with the prior year. Sales of the Leaf are down 35%. Prius Hybrid sales slid7 17% and Focus sales slumped 6%.

Meanwhile, the Chevrolet Silverado full-size pickup sales rose 18% through August compared with the same period in 2014. Purchases of cars such as the Ford Mustang and Dodge Challenger are growing rapidly this year. And the Honda Pilot, Nissan Murano and Toyota Highlander, all sport-utility vehicles, have posted double-digit sales increases so far this year.