GDP is Down, But What Do Payrolls Say About A New Recession Risk? – Real Time Economics

U.S. gross domestic product shrank by 2.9% in the first quarter of 2014, by far the worst quarter since the recovery began in mid-2009. But GDP is only one indicator to monitor if the U.S. is slipping into renewed recession. So far the monthly jobs report is one of the key pieces of evidence that the expansion will continue.

One thing to watch: job gains tend to deteriorate even before recession begins, providing a warning signal that recession may be ahead. The annual change in jobs shows this trend clearly. Job growth begins slipping before the recession. It is a leading, rather than coincident, indicator. 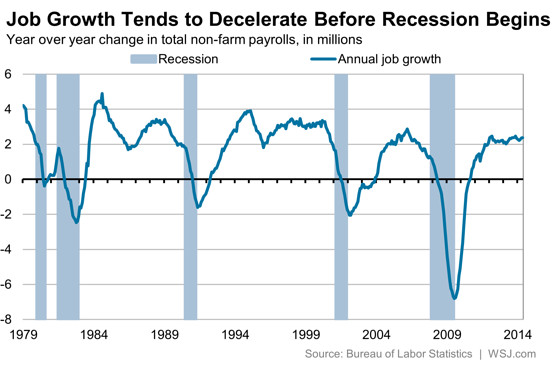 The National Bureau of Economic Research serves as the semi-official arbiter of U.S. recessions, and in making the determination of when recessions begin and end, they pay close attention to the jobs report. (They also watch wholesale and retail sales,  industrial production, and personal income.) The U.S. will get a major update on the employment situation with the Labor Department‘s July 3 release of the jobs report.

The regularity of jobs growth slowing before recession starts has persisted almost without fail since World War II. The decline in job growth prior to the 2007-2009 should have caused many economists to be more pessimistic than they were. 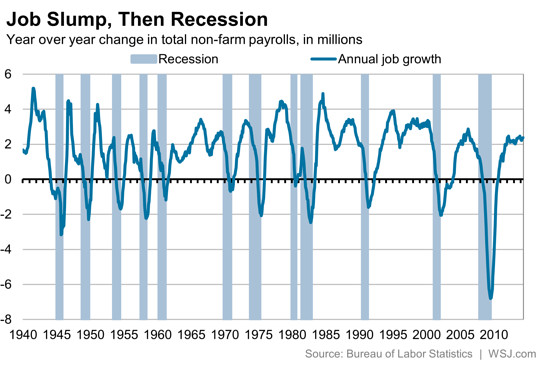 So far in 2014, however, the annual change in job growth has continued to hold up. Since 2012 the economy has consistently added between 2 million and 2.4 million jobs per year and it would be highly unusual for recession to begin without any deterioration in this metric. In the most recent jobs report, the year-over-year change was 2.38 million. 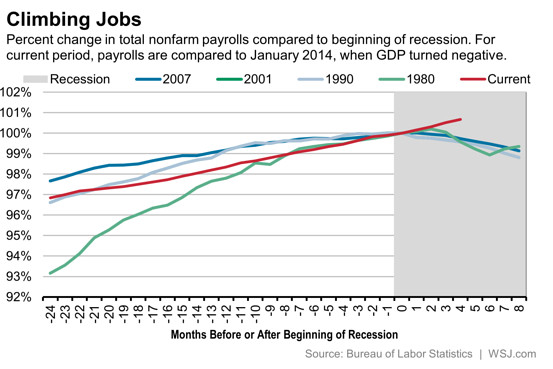 It’s also very unusual for the number of jobs to continue growing after a recession begins. If the first quarter’s negative GDP report marked the beginning of recession, then we’ve now had 5 months of job gains since January.

This job growth is far too strong to mark a typical-looking turn into recession. As the chart above shows, in recent decades, the economy continues to add jobs, at a slower and slower pace, as recession nears. Once recession has begun and growth contracts, the total number of jobs in the economy begins to decline.

It’s not at all what has happened so far in 2014. GDP contracted in the first quarter, but job gains have continued.

The Labor Department’s jobs numbers are subject to revision. At turning points in the economy, it’s often the case that reports that initially were strong are revised downward substantially. (The Commerce Department revises its numbers too, and it’s possible the plunge in GDP could eventually be revised away.)  But barring surprise revisions, the job growth so far this year has been too strong for recessionary alarm bells to sound. Here’s the same chart as above, updated to include all the recessions since 1945: 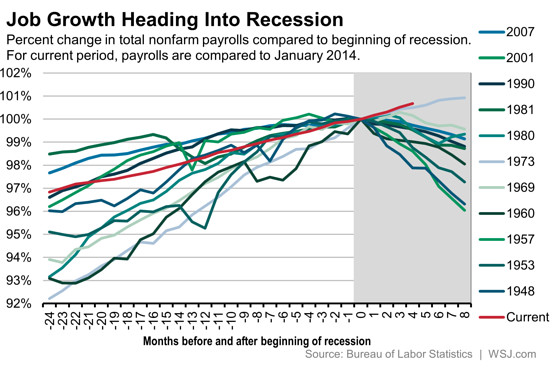 How unprecedented would recession right now be? The above chart shows job growth heading into all 11 recessions since World War II. This year’s job growth is stronger than all 11 recessions. And the only recession that even gets close was 1973 to 1975, when the economy was wildly overheated and inflation was climbing by more than 10% a year.

Coming jobs reports could take dramatic turns for the worse. But so far the gains in payrolls suggest a recovery that remains entirely on track.