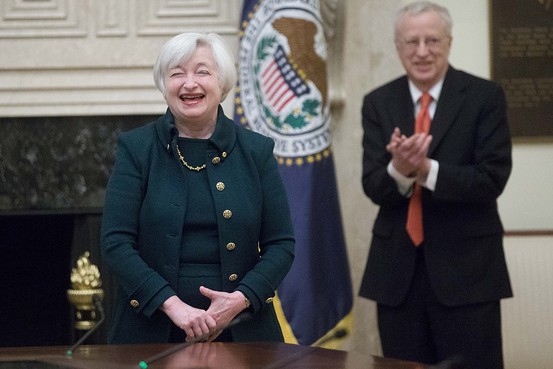 Janet Yellen smiles after taking the oath of office as chair of the Board of Governors of the Federal Reserve as her husband George Akerlof applauds in Washington, D.C., on Feb. 3.
Bloomberg News

George Akerlof has a new job. The Nobel laureate, also known as Mr. Janet Yellen, is heading to Georgetown University in November.

The university said Mr. Akerlof, who has been a senior resident scholar at the International Monetary Fund, will join Georgetown’s McCourt School of Public Policy and teach on topics including “when and how economics should be applied to public policy.”

Mr. Akerlof, 74, returned to Washington when Ms. Yellen became vice chairwoman of the Federal Reserve in 2010 after serving as head of the San Francisco Fed. (She was sworn in for the top job in February, with Mr. Akerlof by her side.)  The couple lives in the Georgetown community of Hillandale.

Mr. Akerlof spent most of his career teaching at the University of California at Berkeley (conducting research with Ms. Yellen). He won the Nobel Prize in economics in 2001 (with Michael Spence and Joseph Stiglitz) for his work, “The Market for Lemons: Quality Uncertainty and the Market Mechanism.”