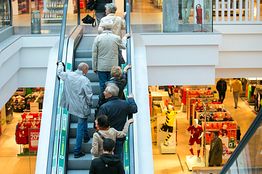 Shoppers at a department store in Berlin, Germany. The country’s economic growth likely picked up in the second quarter, buoyed by the consumer sector, the Bundesbank said.
Bloomberg News

FRANKFURT—Economic growth in Germany, Europe’s largest economy, likely picked up in the second quarter, the country’s central bank said in a report Monday.

“The expansion of economic activity in Germany likely strengthened in the second quarter,” said the Bundesbank in its monthly bulletin. The central bank said that momentum came from the consumer sector which is being supported by good labor market conditions and “considerable” wage increases.

“In addition, Germany’s export business has strongly picked up,” it said.

The bank’s comments were made less than a month before Germany’s statistics office reports an initial estimate on growth in the second quarter. The economy grew by 0.3% in quarterly terms in the first three months of the year, buoyed by domestic demand.

The Bundesbank said in June that it expected the economy to grow by 1.5% this year in calendar-adjusted terms, to be followed by growth of 1.7% both next year and the year after.

The bank also said that industry in the economy was poised to recover, despite sluggish growth in the early spring months after a lull in orders during the winter. Still, the “strong increase” in orders in April and May, especially foreign orders, pointed to a rebound in coming months.

After declining in the first two months of the year, industrial orders data have made monthly gains in two out of the last three months, official data show.