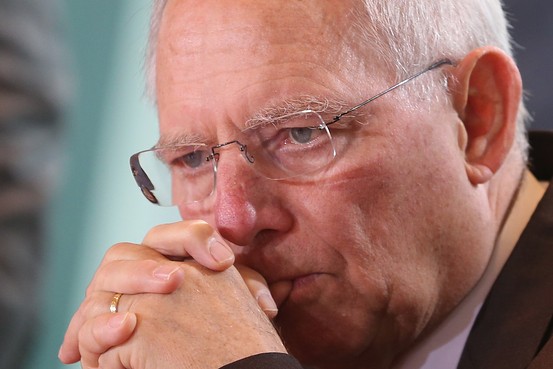 Until the end of last year, Greece was developing better than expected under the bailout programs, Wolfgang Schäuble said, but problems have arisen since then.

“The situation in Greece is very specific,” Mr. Schäuble said at an event here.

Over the long term, weaker eurozone member countries can’t expect stronger countries to finance their over spending, he said.

His Austrian counterpart, Hans Jörg Schelling, said that the risk of Greece exiting the euro remains, but that the consequences of such a move would be unforeseeable.

Greece isn’t Europe’s only problem—it faces a number of problems such as high youth unemployment. Mr. Schäuble said pumping more money into the system won’t be enough to solve all of Europe’s problems and that reforms must be implemented.

He said Europe also needs to have a discussion about what sustainable growth means. The eurozone’s more mature countries might have to settle for economic growth less than 2% rather than more than 2%, he said.

Late Thursday, in an interview with the Austrian news show “ZiB 2,” Mr. Schäuble said Greece must fulfill the conditions of its existing bailout program in order to receive more money.

“Greece must implement what it pledged to do. Otherwise, there can’t be any payments from the current [bailout] program,” he said in the interview.

Europe remains ready to help Greece, but Greece must let itself be helped, he said. The other countries won’t agree to provide Greece with further aid if the Mediterranean country says it won’t honor the agreements it has already made, he added.

Politicians in Greece have to explain to the Greek population what is necessary to get out of the country’s difficult situation and not blame others, such as Brussels or Berlin, for the country’s problems. Otherwise the population won’t accept necessary reforms, Mr. Schaeuble said.

“That is a bit the problem, but it can’t be solved by making others scapegoats. Instead one must recognize what is necessary” to do, he said.

The other 18 members of the eurozone can’t solve the problems in Greece against the will of the responsible parties in Greece, he added in the interview.