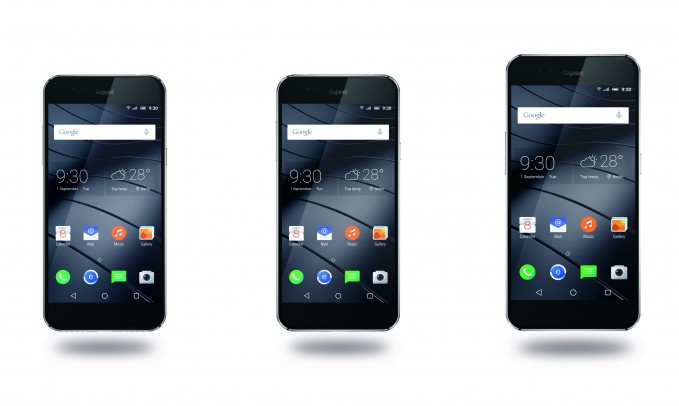 German company GIGASET has become a surprise entrant in the smartphone arena. At its press conference in Berlin on Tuesday it unveiled three new smartphones – the ME and ME Pure, both of which sport five inch screens, and the larger ME Pro which boasts a 5.5inch screen.

The German company, which is a huge player in the wireless DECT phone market, says the new phone marries high-tech engineering with innovative features and a stylish and robust design. The models are certainly aimed at design conscious consumers with their stainless steel finish, use of gorilla glass, which features front and back on the pricier models and classy looking rounded edges.

The phones include high-end camera facilities with the top-end model, the GIGASET Pro boasting a 20 mega pixel rear camera and an eight mega pixel front one. The GIGASET ME features a 16 MP rear camera with the GIGASET ME Pure sporting a13 MP one. The camera also includes what GIGASET claims is an ultra fast focus systems. There is also the Focus Later feature which is built around a small motor that allows shots to be taken in quick succession at 5 different focal lengths, so users can select the optimum image from the photographs that were captured. There is also macro mode, which shoots up to five centimetres away, as well as a 2K video camera.

Another innovative feature is the DUAL sim card slot which can also accommodate a second micro SD card if the users requires it. The phone also boasts infrared technology which GIGASET claims means that the phone can moonlight as a remote control for up to 95% of the TVs and set top boxes available in Europe.

Also on board are High-end HD sound, external speakers, a suite of embedded audio features and Bluetooth lossless.
The battery features Fast charge tech which enables the use to have 25% of the battery power after a ten minute charge. The company claims users can make calls for up to 24 hours straight or enjoy music for up to 34 hours.

The phone also sports finger print recognition technology and the users can set it to accommodate as many ten sets of fingerprints. There also health suite with blood pressure measurement and steps taken as well as an ultra violet sensor for gauging the sun’s rays.