Get a Job? Most Welfare Recipients Already Have One – Real Time Economics 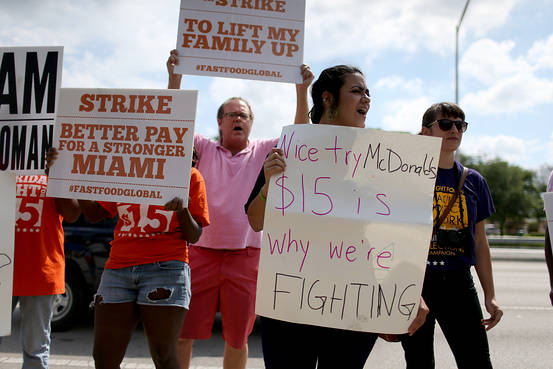 A majority of welfare aid flows to households headed by a working adult, a University of California, Berkeley study found. Addressing that issue is one goal of fast-food worker protesters, such as those in Miramar, Fla., on April 2.
Getty Images

It’s poor-paying jobs, not unemployment, that strains the welfare system.

That’s one key finding from a study by researchers at the University of California, Berkeley, that showed the majority of households receiving government assistance are headed by a working adult.

The study found that 56% of federal and state dollars spent between 2009 and 2011 on welfare programs — including Medicaid, food stamps and the Earned Income Tax Credit — flowed to working families and individuals with jobs. In some industries, about half the workforce relies on welfare. 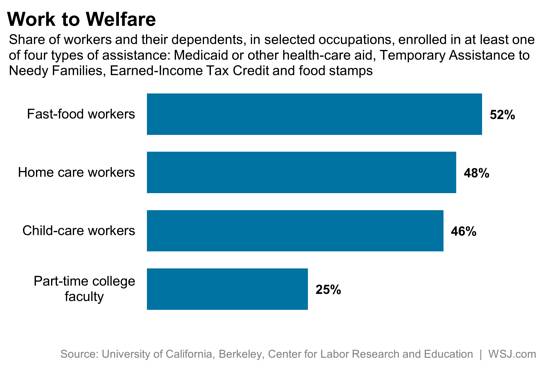 “When companies pay too little for workers to provide for their families, workers rely on public assistance programs to meet their basic needs,” said Ken Jacobs, chairman of the university’s Center for Labor Research and Education and one of the report’s authors.

More than half of front-line fast-food workers receive some form of government assistance.

Pay for those workers has received significant attention recently. Fast-food workers have held several protests and strikes over the past year. And earlier this month, McDonald’s said it would raise pay for 90,000 of its lowest-paid employees at company-operated stores.

Among other fields, 48% of home-care workers and 25% of part-time college faculty also receive government assistance.

The report bolsters the long-standing contention that taxpayers are subsidizing low-wage employers.

A report from House Democrats in 2013 found that a single 300-person Wal-Mart Supercenter store in Wisconsin costs taxpayers at least $904,542 per year, or about $5,815 per employee. Wal-Mart announced in February that all off its employees would earn at least $10 an hour by next year.

Not all economists agree the welfare programs subsidize low-wage employers. Douglas Holtz-Eakin, president of the right-leaning American Action Forum and former director of the Congressional Budget Office, said in a recent essay that income-support programs raise the cost of doing business for low-wage employers.

“The reality is that low-wage employers compete with income-support programs for the time of workers,” he said. “Those programs may contribute to pricing low-skilled workers out of jobs and increasing the incentive to substitute modernization and technologies.”

Also, some government welfare programs, especially the earned-income tax credit, are designed to encourage Americans to seek jobs, and by their nature should flow to workers and their families.

Of those receiving that tax credit, 74% were part of a working family, according the study. Meanwhile, 61% of Medicaid and other health-care programs for the poor went to working families. Just 36% of food stamps and 32% of Temporary Assistance to Needy Families, or TANF, went to households led by workers.

The share of federal aid flowing to working families varies significantly across states.

In New Hampshire, 65% of federal welfare assistance went to working families, followed by 64% in Texas. At the other end, 38% of federal aid in West Virginia went to employed families..

See how your state ranks:

Why Are Wages Growing Slowly Despite McDonald’s , Wal-Mart Raises?

Continuing Jobless Claims Near a Low, and That May Not Be Good