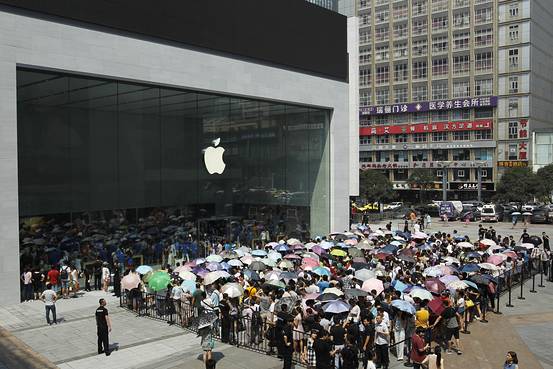 People wait at the front door of Chongqing’s first Apple direct-sale store in China this week.
CHINAFOTOPRESS VIA GETTY IMAGES

Six years after the financial crisis sent shockwaves through the global economy, consumers around the world are still fretting about the outlook for growth.

According to Nielsen’s second-quarter report on consumer sentiment around the world, more than half of respondents representing more than 2 billion people in 60 of the world’s largest economies believe their country’s still in recession.

“There’s a lot of volatility we’re observing, and so they don’t see their local economy on a robust path going forward,” said Louise Keely, a senior vice president at Nielsen and president of The Demand Institute. “So while global consumer confidence has been rising slowly to reach near-optimistic levels in the past year, there is still evidence that consumers feel uncertain about their countries’ futures.”

Recessionary concerns rose in particular in South America, where several economies are already shrinking. To a much smaller extent, there was also greater fear in the U.S. after a bad first quarter forced many economists to lower their forecasts.

But feeding contrarian bets, Nielsen said two regions that have captured much of the headlines in recent weeks–Europe and China–are showing improving consumer sentiment.

European consumers are slightly more upbeat as the economy appears to have avoided a triple-dip recession. That’s despite the ongoing Greek crisis and a warning from the International Monetary Fund that persistently high unemployment and debt levels put the region at risk of another contraction if it were to be hit by another economic shock. Much of the improvement came from Russia, however, as consumers start to recover after hunkering down for more than a year amid plummeting oil prices and international sanctions.

To be sure, a host of European countries–including two of its largest economies, Italy and France–remain at the more pessimistic end of Nielsen’s sentiment spectrum.

Although recent bouts of turbulence in China’s stock markets may signal doubts about prospects, Chinese consumers appear largely optimistic. That’s also despite many economists predicting a faster deceleration in economic growth than promised by Beijing.

“In China, consumers’ desire to spend is growing, especially in the lower-tier cities and in the rural parts of the country,” said Yan Xuan, head of Nielsen’s China department. Higher income levels and better access to products through the Internet are helping, he said.

That could be welcome tidings for a global economy with increasingly dour prospects.

China’s trying to move its economy away from reliance on exports and toward greater domestic consumption. As more of its 1.4 billion people move up the income ladder, they should help fuel global demand.

“Consumption as a share of total output was falling until recently, but it seems to have flattened out,” said Keely said. “The Chinese consumer is the ray of hope.”